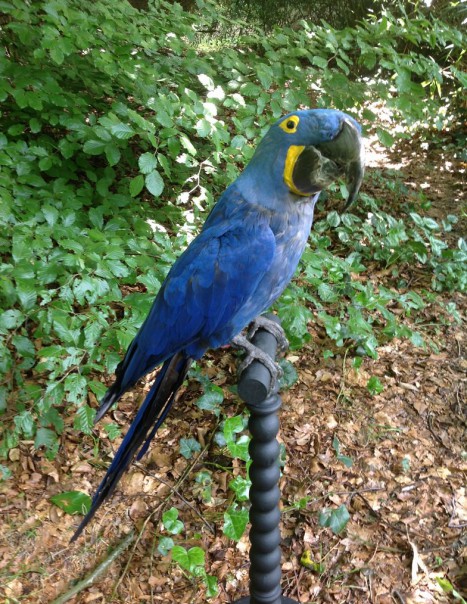 The hyacinth macaw is the largest bird from the family of Psittacidae, size up to one meter.

This robust bird, with a very powerful beak is also characterized by an almost completely blue plumage with small yellow areas around the eye of the lower jaw of the beak. Its singing is also very powerful and can last several minutes.

The hyacinth macaw is endemic to central South America, where it lives in moderately wooded forests, it loves palm trees.

Its nest is on rocky and steep walls where the cliff faces offer it a lot of possibilities. The nesting period lasts between 27 and 30 days.

This is a vegetarian species feeding mainly on palm nuts living in small groups.

The hyacinth macaw is now in a critical survival situation saw by the destruction of its habitat and regular catches for its commercialization as a pet. The species is protected since the 90’s and considered vulnerable, the population not
exceeding 3.000 individuals.