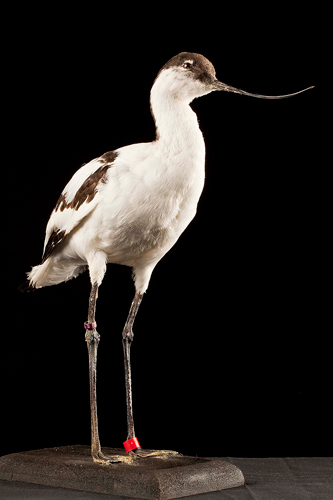 This large black and white wader belongs to the avocet and stilt family, recurvirostridae.

Both sexes have similar plumage but the female has shorter beak and is straighter than the male. Adults have a white body with scapulars and sides of the black coat. On top of the wing, small and medium outer covers are black, as are the six outer flight feathers. Chin, throat, before the neck and cheeks are white. The long black beak is curved upwards. The eyes are dark brown. Long legs and webbed feet are pale blue-gray. This species keeps the same type of plumage throughout the year, with no seasonal variation.

The Avocet breeds in flat, open areas with brackish or salt water, and a short vegetation. This bird is seen on lakes, lagoons and estuaries with little vegetation. Outside the breeding season, it frequents tidal mudflats. It can be found occasionally on freshwater lakes or rivers, cultivated areas and up to 3000 meters in Afghanistan. It breeds in temperate Europe, Asia, southern Siberia, northern China, and locally in Africa. This species winters from Europe and Africa, the Middle East to the northwest of India and southeast China.

This species is migratory, but populations are present all year in Africa and parts of Western Europe. It feeds primarily on aquatic invertebrates, larvae of insects, molluscs, crustaceans, worms, fish and plant materials. It feeds by pecking, or vigorously brushing the mud from one side to the other with its long beak. It also plunges head and half of its body in the water like ducks. It feeds into the mud and swimming often if necessary.

Courtship displays are very active before mating. Lofts can be observed feathers and parades during which the bird tilts its head forward while keeping a stiff neck. Avocet raises the spout out of the water and then, it immerses the head to the eyes. The movements are synchronized between the two partners.

Their coupling is very fast. Just after the birds cross their beaks and advance together with head up and a wing of the male placed on the back of the female.
During the breeding season, it becomes very noisy and aggressive. They sleep in large groups on dry shores or even standing in water. They also breed in colonies near water. These are gregarious birds with nests relatively close to each other, and colonies may from 5 to 100 couples. Outside the breeding season, the Avocet feeds into groups where each defends a private area.

During migration, they fly in loose and usually quite low lines. The legs lurking behind the body, while the neck and head protrude forward.