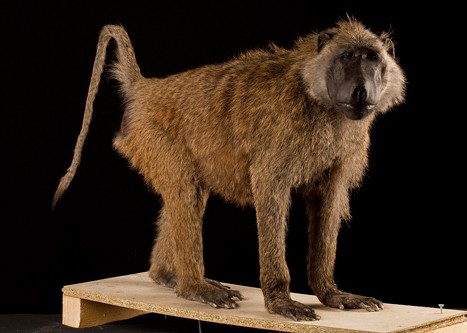 Olive baboons are the most widespread and most numerous of all the baboons, present in 25 African countries, Mali and Ethiopia to Tanzania in the mountainous regions of the Sahara. Its habitat consists of savannas, steppes or forests.

The olive baboon is named for its fur which at a distance appears gray-green. More closely, we see that its dress actually has many shades and is composed of hair with yellowish brown and black rings. The hair of the figure of baboon are thinner and the color varies from dark gray and black. This coloration is shared by both sexes but males are distinguished by mane. Beyond the mane, the sexes differ in size and weight.

The olive baboon has a flat figure but a long snout resembling a dog. It carries its tail in a particular way: it is erected over the body for its basal part and then “breaks” and hangs down, forming an acute angle. The stripped area of ​​the rump, made famous by cartoons and movies, is significantly smaller in the olive baboon than other baboons.

It can be found in different habitats in savannas, in the wide expanses of meadows in sparse forests, jungles and deserts, dense tropical forests. It is not dependent on a single food. It is omnivorous, finding its diet in any environment. In the steppe it will eat differently from its congener living in the forest. It uses its entire environment for food: on and under the ground or in the canopy. This includes a wide variety of plants, invertebrates and small vertebrates, leaves, herbs, roots, bark, flowers, fruits, lichens, tubers, seeds, mushrooms, rhizomes but also spiders and scorpions.