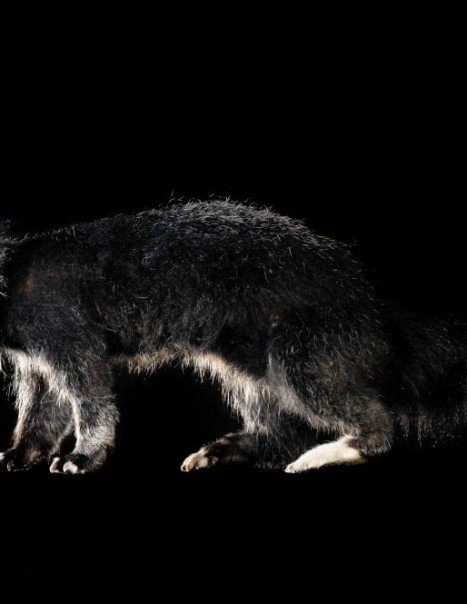 It is the only species of the genus Arctictis, the family of Viverridae .

This little Asian vegetarian is a vulnerable species, also known as bearcat.

Diet consists mainly of plants, and particularly fruit. Badly yet we know the lifestyle of the Binturong in nature. It is a solitary inhabitant of the great forests of tropical Asia and it is no common, manners are entirely nocturnal, there is little chance that the random encounter during a hike in the woods.

It spends the day wound on itself, ensconced in a tree fork or bottom of a hollow trunk. It is an arboreal animal, climbing wonderfully; ground moves poorly hopping rather than walking. It happens to walk under a branch hanging like the sloth.

The smell of Binturong musk is similar to a hot popcorn. It has a habit to brush its tail against a tree. When it sees other congeners, it announces its presence with a howl.

This shaggy haired animal has the characteristic of relatively easily be tamed by man. This attitude has led to the proliferation of the species in captivity. It becomes very affectionate towards its masters, also we often breed it for this ability and not for its spectacular value. It must still be wary of its versatile mood because when frightened or angry, it can turn into a real fury. Its bites are deep and painful.

Its gestation period lasts about 3 months and the litter is 1 to 3 youngs.