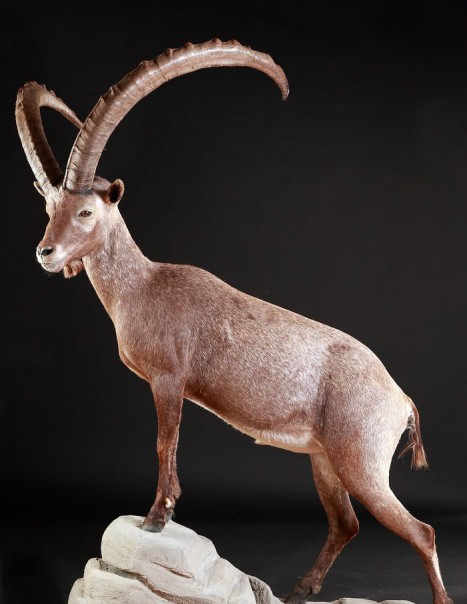 Also called European Ibex, it is a mountain animal. We find the Pyrenees and the Ibex Ibex of Espagne. This is an animal with a very thick fur in brown tones somewhat resembling a goat. The proportion of the ibex are still above with an average of 80 cm at the shoulder and spun length of about 1.50 meters. It wears very large horns for males, up to one meter and can weigh more than 6 kg per pair. For females the horns generally reach a maximum of 30 cm. The Ibex is a herbivorous mammal belonging to the order Artiodactyla and family Bovidae

Regarding their diet, the Ibex ruminants are herbivores, they eat mainly mosses, lichens, legumes and grasses, twigs sometimes when it happens to find. . Its habitat is mainly located in the mountains but the altitude of the place of life changes with the seasons, the group is in constant motion. A major effort has been made to its reintroduction in Europe and is now visible in Switzerland, in France, of course, Slovenia, Austria, Germany, Bulgaria, Spain and Italy, still in the mountains. Only the European map continents has Ibex groups.

The mating season lasts from December to mid-January, the Ibex living in groups, males clash in gored to fighting and stronger given the right to choose their female. Gestation lasts 170 days and calving occur in mid-June. Litters are usually one small weaned at about 2 or 3 months.

The Ibex was for a time to extinction. France, in 1963, had opened a park, the Vanoise National Park to protect the last specimens. Today, as we explained above, the ibex is the object of special attention and reintroductions are organized in a number of mountain ranges in Europe. However, it is still considered a species at risk of extinction and therefore protected.