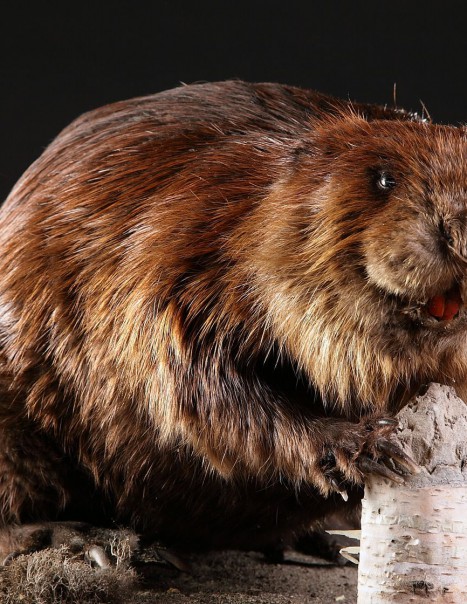 The beaver is one of the largest rodents. It measures around 1.10 meters and weighs 20 to 25 kg. The bulk of the species is in Canada and Europe (north of France and Eurasia). Even if it is a land animal, its survival depends in large part of the water and trees. Its semi-aquatic nature requires the presence of streams or lake in its residential areas. The beaver especially likes the temperate zones.

It usually lives in a burrow, but in some areas, it happens that it lives in a hut made of branches and with an entrance located under water. This hut has expanded over generations and can become very large and bulky after few years. True architect, beaver stands out for the construction of a complex series of canals and dams that serves to manage the water level so that it can easily access food storage areas.

This nocturnal animal is mainly active at night and dusk. It has a very delicate communication language. Depending on the situation, this animal may issue different kinds of cries. It can whisper, moan, sigh and even scream to mark and defend their territory. Although it is a semi-aquatic rodent, the beaver is more comfortable under water than on land.

Many beaver character traits like those of humans as the ability to store and transport food. This is a very resourceful animal who never gets tired of looking for food. Inveterate builder, this animal can build a large dam in the stream and transform its environment to suit it. The beaver also likes to play and bathe regularly.

Due to its nocturnal and suspicious character, the beaver is difficult to observe. It feeds on bark and some aquatic plants.

This monogamous animal reaches sexual maturity at the age of 2 to 3 years depending on gender. Mating occurs between January and March. The gestation period is 107 days and the female can have up to 5 babies.