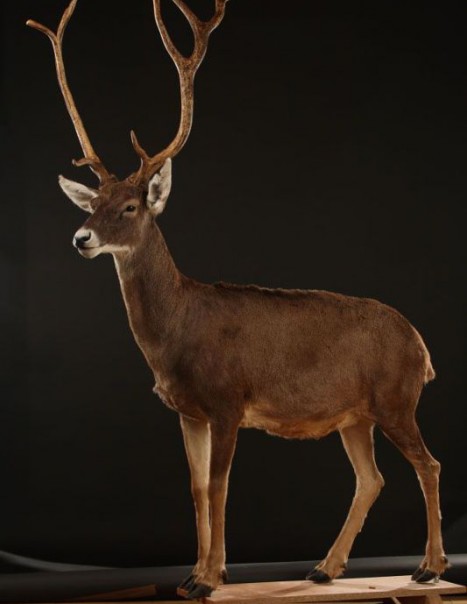 The Thorold’s deer, also known as the white-lipped deer for the white patches around its muzzle, is a deer found in grassland, shrubland and forest at high altitudes in the eastern Tibetan Plateau.

Thorold’s deer is one of the largest deer species, with a shoulder height of around 115 to 140 cm. Males, which typically weigh from 180 to 230 kg, are significantly larger than females, at 90 to 160 kg in weight. The hair is coarse and grey-brown over most of the body, fading to yellowish buff on the underparts, with a distinct reddish-brown patch on the rump and a ridge of darker hair running down the spine. During winter, the coat is paler, and about twice as thick as during the summer, being thicker even that of a moose. The head is darker than the rest of the body, especially in males, and contrasts with pure white markings on the lips, around the nose, and the throat just below the chin. Adult male Thorold’s deer have antlers, measuring up to 110 cm and weighing up to 4 kg.

Thorold’s deer inhabits the Chinese provinces of Tibet, Sichuan, Qinghai, Gansu and far northwestern Yunnan. It is found at elevations of 3.500 to 5.100 metres and migrates seasonally from high summer pastures to lower terrain in winter.

Thorold’s deer is a crepuscular animal, normally living in herds of at least ten individuals. Outside of the breeding season, males and females usually travel separately.

They feed on a wide range of available plants, especially grasses and sedges, but including some larger plants such as rhododendrons and willows. They have few natural predators, although snow leopards, wolves, leopards and mountain lions have been known to eat Thorold’s deer on occasion.

The rut occurs between September and November, when herds containing both males and females become more common. Such herds consist of several males, each maintaining a small harem of females that they protect from other males. The female gives birth to a single young after a gestation period of 220 and 250 days, typically in either May and June. Shortly before giving birth, the mother locates a secluded den, often in bushes or shrubby cover. The calves are born with white spots, and able to stand within about 40 minutes of birth. Initially, the mother protects them by moving them between a number of different locations, only visiting them twice a day to allow them to suckle. After about two weeks, they rejoin the herd.

The calves’ spots begin to fade after around six weeks, and they attain the full adult colour by the end of their first year. They become sexually mature during their second or third year, although males are rarely successful in the rut until they are at least five years old. Thorold’s deer have been reported to live up to 21 years in captivity, but probably do not survive for more than 12 years in the wild.

The species is listed as vulnerable by the IUCN and is a Class I protected species in China. It is a threatened species