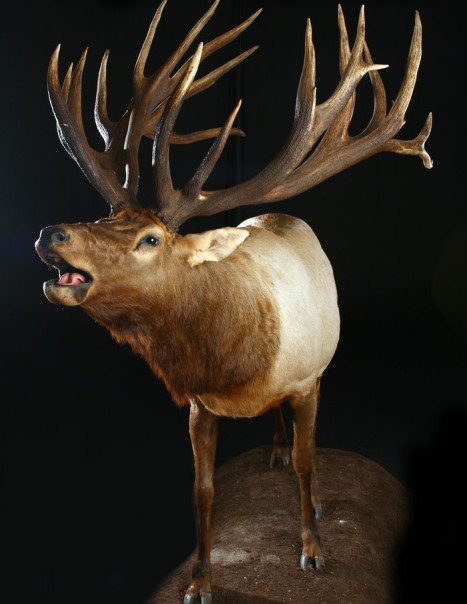 Cousin of the deer, the elk are much bigger. The adult male is about 150 cm tall at the shoulder and weighs 300 to 350 kg, some large males can reach almost 500 kg at the end of the summer before the rut, and therefore the period of reproduction. Females are much smaller. The elk dress is reddish brown in summer and dark brown in winter. The dark head and neck contrast with the croup. The long hair on the neck is referred to blackish mane.

This deer produces new horns every year, a few months in the spring and summer. The woods seem particularly large in the summer season when they are covered with velvet that protect them during their growth. At the end of the summer, antler growth is over, it gets rid of the pile of wooden friction, which puts the bone structure exposed. The cleaned wood are pale gray.

Wapiti means “white rump”, it is known as “momentum” in Europe. It is sociable and lives long: on average males survive for 14 years, while females can reach 24 years.

Despite the fact that it can move much, every elk is very attached to certain places within its home range. In the mountains, this species often spent the summer in altitude and winter in the valleys. However elk is a fickle animal and some may do the opposite.

Unlike other deer, elk has upper canines, which apparently now are useless.