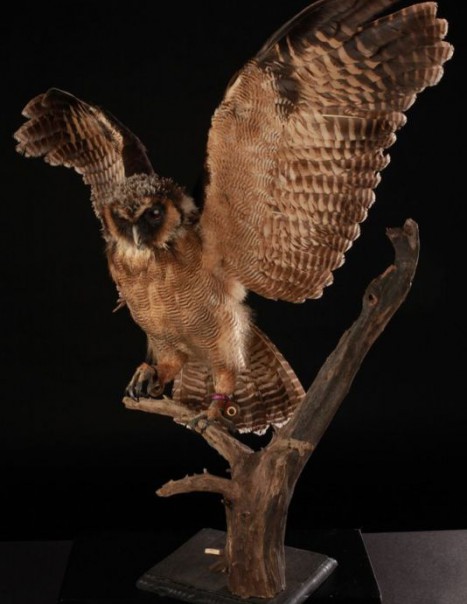 The brown wood-owl is an owl beloging to the Strigidae family and to the earless owl genus Strix.

Brown wood-owl have large tawny or reddish-brown facial disks, with a black area on the edge of the eye and a narrow visible dark border on the outer part of the disk. The blackish brown head with a red hue is clearly separate from the rest of the mantle by a large red or chamois-cinnamon necklace. Coats and back are reddish-brown with dark brown or blackish bars.The base of the feet are feathered, the 2 terminal phalanges are naked. The eyes are dark brown beak is greenish horn, bluer at the base. The toes are lead colored.

The species is found in the tropical rain forests, along the coastal areas, the plains and low hills. In the Sunda Islands, they occupy lowland forests. It lives at altitudes between sea level and 500 meters.

They have a strictly nocturnal activity and are relatively timid. They spend all day hidden in the shadows of the leaves in tall trees.

The breeding season runs from January to March and during this period they are rather noisy. The nest is located in a natural cavity in a hollow in the fork of a tree, where the inside of the front of a cliff, but the information needs confirmation. Laying usually includes 2 eggs.