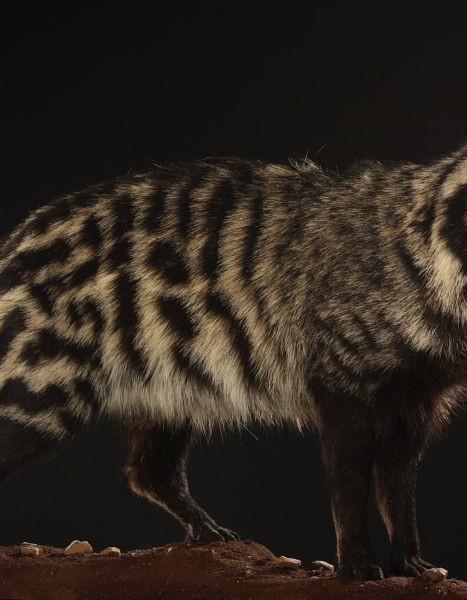 The African civet is the largest representative of the African Viverridae. It is the sole member of its genus.

African civets can be found from coast to coast across sub-Saharan Africa.

They are primarily nocturnal and spend the day sleeping in dense vegetation. During the night, when they are the most active, they can be found in a wide variety of habitat consisting of thick forest to open country.

The African civet is a solitary mammal that is easily recognizable by its unique coloration; the black and white stripes and blotches covering the coarse pelage of the animal are extremely variable and allow it to be cryptic. The black bands surrounding the African civet’s eyes closely resemble those of theraccoon. Other distinguishing features of the African civet are its disproportionately large hindquarters and its erectile dorsal crest.

The African civet is omnivorous, taking small vertebrates, invertebrates, eggs, carrion, and vegetable matter. It is capable of taking on poisonous invertebrates and snakes. Prey is primarily detected by smell and sound rather than by sight.

Like all civets it has perineal glands that produce a fluid known as civet, which it spreads on markers in its territory to claim its range. It is used in the perfume industry.

Some civets, such as the African civet and the Congo water civet, are semiaquatic. Although most civets live on the ground, palm civets are found in trees and eat fruit.

There are no great discernible differences in measurements between sexes. Weight can range from 7 to 20 kg. Head-and-body length is 67 to 84 cm, while the tail is 34 to 47 cm and shoulder height averages 40 cm. It has a short broad neck, a pointed muzzle, small rounded ears, small eyes and a long bushy tail.[3]

The African civet has long, curved, semi-retractile claws. Its feet are compact and unsuitable for digging or climbing and the soles of the feet are hairless.

The coat is unique to each individual, just like a human fingerprint. The dorsal base color of the fur varies from white to creamy yellow to reddish. The stripes, spots, and blotches which cover the animal are deep brown to black in coloration. Horizontal lines are prominent on the hind limbs, spots are normally present on the midsection of the animal and fade anteriorly into vertical stripes above the forelimbs. The tail of the African civet is black with a few white bands and the paws are completely black. The head, neck and ears are clearly marked. A black band stretches across its eyes like that of araccoon and the coloration of its neck is referred to as a double collar because of the two black neck bands.

Following the spine of the animal extending from the neck to the base of the tail is the erectile dorsal crest. If it feels threatened, it raises its dorsal crest to make itself look larger and thus more formidable and dangerous to attack.

The average lifespan of an African civet is 15 to 20 years. Mating occurs in the warm and wet summer months from August to January. Females create a nest which is normally in dense vegetation and commonly in a hole dug by another animal. Females can have up to three litters per year. Female African civets normally give birth to 1 to 4 young. They are covered in a dark, short fur and can crawl at birth. The young leave the nest after eighteen days but are still dependent on the mother for milk and protection for another two months.