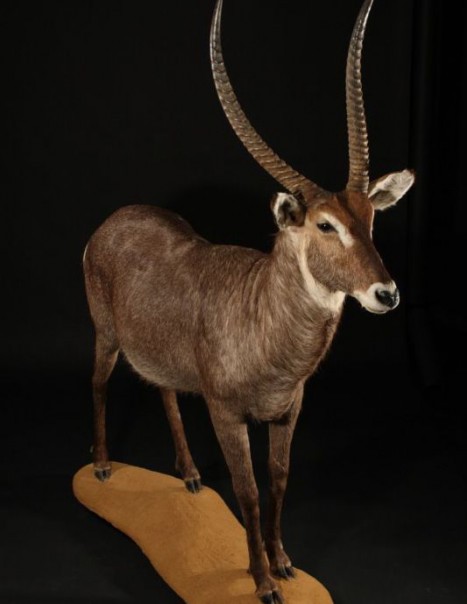 The waterbuck, also known as the sing-sing antelope, is a mammal from the bovidae family.

It measures about 1.30m and weighs 150 to 160 kg. Its dress is fawn or gray-brown with a circular spot on the hindquarters. Its hair has the characteristics of being long, mid hard and has regular implementation.

It is found in West Africa, East or South, in places like Zimbabwe, Congo and Cameroon.

So as cow, croissant cob is herbivorous. It feeds mainly on herbs. That is partly why it lives in the savanna or in the undergrowth. The second reason is that they protect lions are predators par excellence. However, they have a secret weapon to scare the enemy: indeed, they secrete a stench that would deter most hungry carnivores.

At the social level, the waterbuck lives in herd. Generally, we can count from 20 to 40 females with their young. A female has one small litter, the gestation lasts 8 months. The males, meanwhile, watch over the females and calves due to a perimeter of one kilometer. They assume that role for 10 years. After this time, they are replaced by younger males.

The waterbuck still has good years ahead, it is not threatened with extinction. Portions of hunting safaris are organized especially for this species. The client are European or American origin and rather wealthy. This boosts tourism in African regions and thus constitutes a source of income.