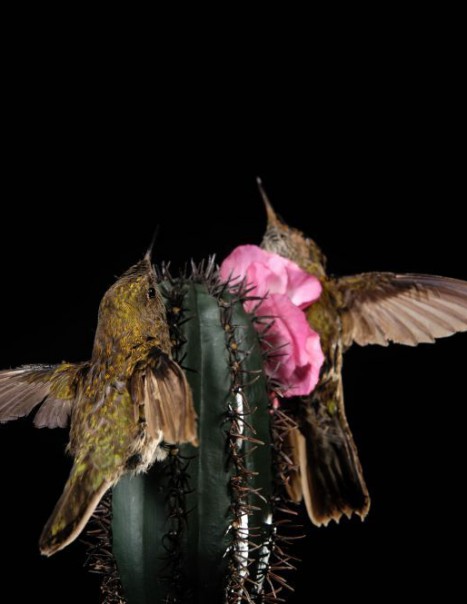 It belongs to the family of Trochilidé.

Also called Hummingbird, this bird does not measure more than 10 cm and weighs little more than 3to 4gr. In common parlance, the term “hummingbird” can refer to all the hummingbirds.

Hummingbirds are from the far south of North America and Mexico.

They can be found in all kinds of habitats, from sea level up to 2100 meters which is the upper limit of trees in mixed forests of pines and oaks.

Hummingbirds are common in the thorn forests and on the high slopes covered with grass in oak woodlands. Like most of their peers, hummingbirds are solitary in most aspects of their lives. In the US, these birds are clearly migratory.

In Texas, in the Rio Grande Valley, they breed only from mid-May to late October. In Arizona, one can observe that between mid-March and mid-September, although sometimes attends early arrivals in late February and late check-out in October. In Sonora, hummingbirds  are sedentary and live throughout the year along the coast and inland.

The breeding season extends over a fairly long period, probably from January to August. The nests can be observed in January, March and May. Birds are in sexual reproductive condition in November and December and nests are realized in December.
Little has been written about the courtship behavior of this bird. Nevertheless, we know that the male performs a pendulum back and forth in front of its companion. The parade is accompanied by a sound like the hiss that would produce a bullet and is sharper than any of the small hummingbirds.

The nest is located in a small tree, a shrub that contains creepers or thorn bush, just 2 meters above the ground.
Laying usually includes two white eggs which we do not know exactly the incubation period. The chicks are fed with insects partially regurgitated, nectar not having enough protein to feed young growing. Young hummingbirds leave the nest when they reached the age of 10 days.

Their menu is primarily vegetarian and nectarivore. . They also appreciate the flowers foraging along the bushes with red flowers, it includes cicadas, aphids, spiders and wasps. In winter, when the flowers are no longer available, hummingbirds drink tree sap that becomes a substitute product nectar. They use the holes that were dug by woodpeckers.