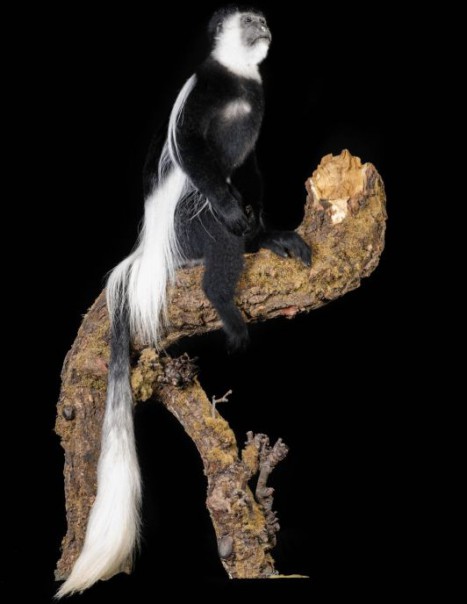 It is the greatest of all colobus. It measures about 60 cm, while its tail can measure up to 1 m. These small primates can weigh up to 15 kg. The males are generally heavier and larger than females. Colobus guereza have no thumb, it is an adaptation to their way of life, enabling them to jump from tree to tree easily. They have a black and white fur. The main color is black, while part of the face, chest, shoulder or tail is tinged with a clear white. At birth, the baby colobus monkeys have white fur.

Colobus monkeys are herbivores and purely vegetarian. They feed on leaves, fruits and buds. They live mainly in the rainforests but can also live in mangrove forests in the wooded grasslands and mountain forests. Most of the time, colobus guereza are perched in the trees, but they happen to get off the ground where they sleep when the area is sparsely forested.

These monkeys live in groups. A group generally consists of 8 to 15 individuals. In this group, one third of the members are female, there is a dominant male as well as other males. Young male colobus must leave their birth group. They will go to battle against the dominant male of another harem to take possession. At night they sleep in turns to watch for predators such as eagles, leopards and chimpanzees. To defend their territory, groups emit cries and agitations and if necessary are violent.

A female colobus reaches sexual maturity at the age of 4 years, while a male at 6. Colobus do not have a specific mating period. Births occur throughout the year. Gestation lasts about 175 days. In general, they give birth to only one young.