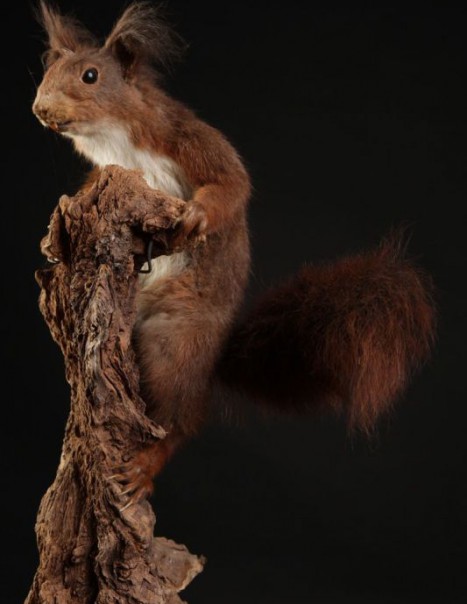 This is a small rodent reaching 26 cm in length for an oscillating weight between 200 and 450g in size adult. Its tail is as long as its body since it measures between 14 and 20 cm.

Its hair is long and its bushy tail is particularly shaped panache. They can also be brown or black. Its ventral pelage and throat are white. Its ears are pointed with long hairs at the ends. Its eyes are relatively large and black. The squirrel has 4 fingers on the front legs and five fingers on back legs. The back legs are longer than the front legs. The fingers are strongly separated and provided with non-retractable claws that allow the squirrel to climb as easily in the trees. It moves only by leaps and bounds and is extremely clever and very good climber.

It is found in Europe, Asia and east of the Urals to China and Korea, with the exception of Portugal and the south of England. It lives in wooded areas. The forests of coniferous or deciduous trees at low altitudes in mountains up to 2000 m in cities, parks and gardens, where it benefits the roofs to make its nest. It marks its territory with secretions from glands odor around the mouth but also by its urine.

This is from the end of winter and until the end of spring that the red squirrel will become more sociable to meet females and mate. The gestation period lasts 40 days and the female will give birth from March to May to a small she will breastfeed for 9 weeks. The female can bear two litters per year. At birth, small weigh about 8 to 10g and are totally blind. They open their eyes after a month.

Their life expectancy is 5 to 7 years in the wild.

It is considered endangered and is therefore highly protected. Raptors, foxes, martens, dogs, cats are its predators.