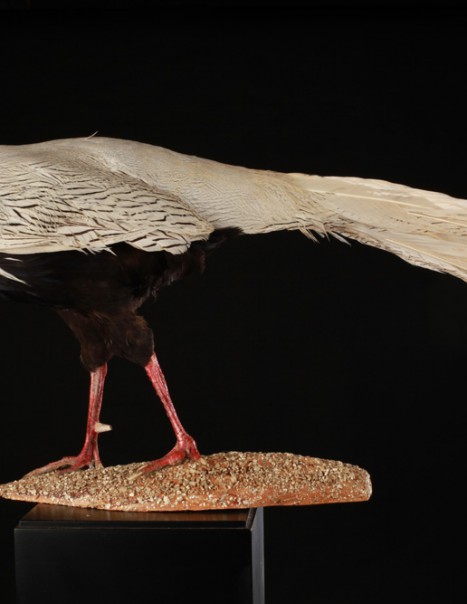 The silver pheasant is a species of pheasant found in forests, mainly in mountains of mainland Southeast Asia and eastern and southern China, with introduced populations in Hawaii and various locations in the US mainland.

Around 15 subspecies are recognized.

The silver pheasant has a long ridge falling largely on the neck, chin and the black throat continues with a brilliant blue-black belly. The top of the body is entirely white streaked with black on the sides. Tail, very long and white, partially serrated black. One of the most remarkable character is formed by the bright red facial wattles which are one of the essential attributes of courtship. The silver pheasants will acquire all of their resplendent plumage during the second year. The males of one year of age often bear numerous black spots on the chest. The beak is gray and the legs are legs. Immatures look like females but often have lighter or faded colors.

It frequents grasslands or bamboo thickets deciduous mountain forests between 600 and 2000 meters.

The standard social group usually consisting of a rooster and two to five hens. This group remains fixed throughout the year. After the eggs have hatched, hens and chicks join the family group after two weeks. Although, in principle, the male takes no part nor incubating or education of the young, it is able to support a group of chicks and replace the mother in case of disappearance of a female.

In principle, silver pheasants reach sexual maturity during the second year. However, it is not uncommon that some at the age of 1 are fertile. The male is polygamous. During the breeding season, pheasants remain in small groups of a rooster and 2 to 5 hens. Within each group, the rooster has a dominant position. The clutch size varies from 6 to 15 eggs. The incubation period does not exceed 27 days. When females incubate, the male stay around them and watch over them.