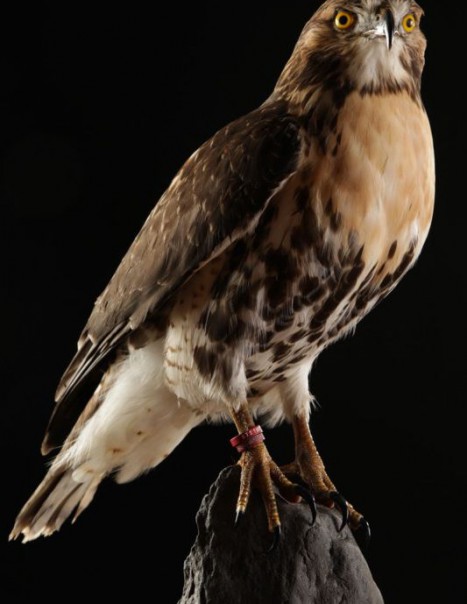 The peregrine falcon is a species of robust raptors, medium size, reputed to be the fastestdiving bird in the world. Prey almost exclusively on birds, but some individuals may also attack small land animals.
It does not build a nest, and essentially nests on cliffs, rarely on trees, structures or tall buildings. The range of the species covers 10 million km². It has twenty subspecies and it is one of the birds whose distribution area is the largest in the world, the species is in fact present on all continents except Antarctica.
The eyes of the peregrines have two foveas for normal and distant views. The view uses half the volume of the brain and can perceive simultaneously three zones, one front and two in relief distant side, able to detect a flying pigeon over six kilometers.
Its lifespan in the wild is of about 13 years on average.
This species likes discovered territories, with few forests. It settled on the rock walls in the mountains or by the sea, nests are usually at least one kilometer from each other and often much more. It is for each couple to have sufficient nourishing territory.In Europe, Siberia or North America, where the climate is colder, the populations are migratory, moving south to winter. Wintering can occur in southern Europe and into Africa and to South America for North American populations.

It is a bad glider. They often retain the same shelter several years, but the nest is very basic, they can also change from one year to another while remaining within the same territory. For this reason, it is assumed that Peregrines live in stable couple in duration.

Laying takes place in February and March in the northern temperate zone, from April to May in more northern and colder areas, from August to October in the southern hemisphere. There is one clutch per year comprising 3 to 4 eggs. Incubation is carried out mainly by the female, but also by the male and lasts about one month from 29 to 32 days, in the majority of cases. Chicks hatch at about the same time. The young are able to fly after 40 days.