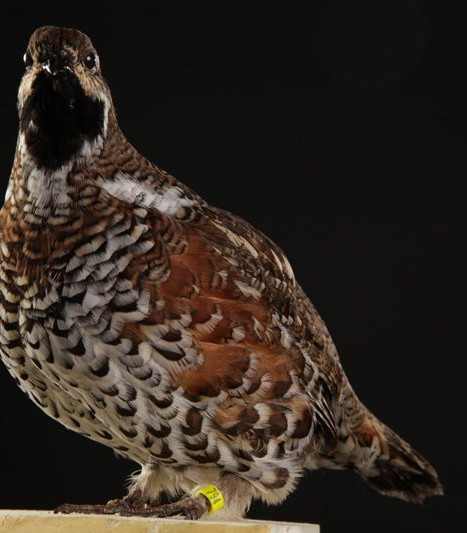 It is a bird of the order Galliformes, family grouse that includes 12 subspecies.
Its size is 37 cm and a wingspan of 48 to 54cm. It weighs between 300 and 450g. Its plumage is mottled black, gray, white, red, nostrils and it has feathered legs. The male erectile crest features a red wattle eyebrow, a black sub-beak trimmed in white. The female has similar characteristics, but a less spectacular plumage that is also less colorful.
The longevity of the hazel grouse is 10 years.
Hazel grouse is a discrete resident of European nature reserves. Present throughout Eurasia, it lives in the taiga, dense forests, and up to an altitude of 1500m in the mountains. Gregarious bird, the male guards its territory and chase females once the young are raised.
Vegetarian, grouse feed on shoots, buds, flowers, roots and fruits, such as rose hips, cherries, strawberries, raspberries and hazelnuts, hence its English name, Hazel Gouse. It also feeds on insects occasionally. The chicks feed on invertebrates.


Between March and May in central Europe, the female lays 7 to 12 oval eggs, brown-yellow in a tree cavity or under bushes. The female incubates only between 23 and 27 days. Young quickly leave the nest.

Popular with hunters, hunting grouse is still regulated and banned in some parts of Europe. Hunters and conservation authorities are involved in organizing the tranquility of the area.