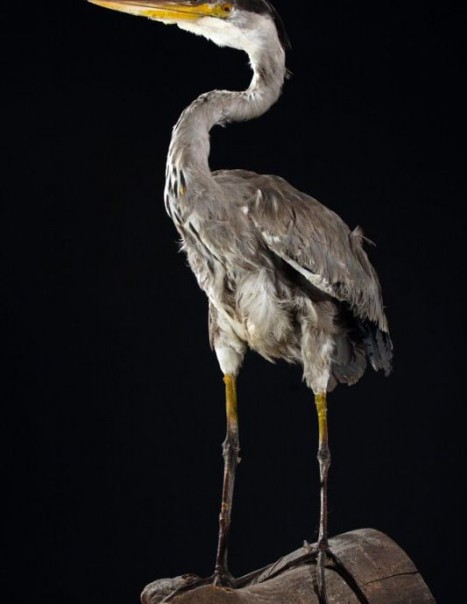 Large gray bird, majestic when standing at rest, its life expectancy is estimated at 25 years. It has long grayish yellow or gray legs, a long neck and a large grayish yellow dagger shaped beak. Below, the head and neck are white with a black crest and dark stripes on the front of the neck and chest. The rest of the plumage is gray pigeon. They seek to feed nearly all kinds of water bodies near urban areas.

The typical cry in flight, often issued in the evening, is hoarse, croaking and sound. They attend any wetland marshes, streams, ponds, where they can find food. It can be fresh water, brackish or salt, still or flowing, as long as it is shallow. They can also attend forests near water.It can spend hours, resting on one leg completely inactive if it is not disturbed. It sticks its neck into the shoulders, only the head and beak are horizontal and seem to spring from its body.

Its way of hunting is special. It walks slowly and bent, in shallow waters, quietly, pointing down its powerful and sharp beak, ready to deal the death blow to the prey that will pass within range. Its flight is heavy and powerful and slow, with deep wing beats. It flies majestically. Sometimes flat, especially before landing.

It builds a large nest with dry twigs, branches, often nests in a single tree. The female lays from March to May mats eggs, blue-gray, sometimes tinged with red. Incubation is held alternately by both parents and lasts about 26 days.
They are fed by both parents. Young do not fly very well before the age of 55 days.
It feeds mainly on fish, eels, frogs, rodents, insects, crustaceans and reptiles.

Currently, the species is doing very well thanks to its full protection and better management of its habitat.