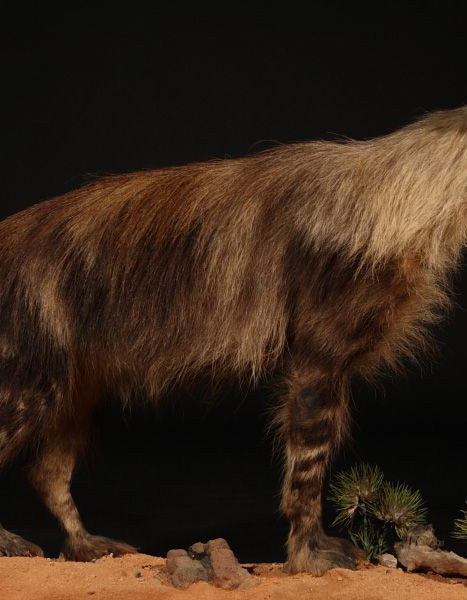 The brown hyena is a carnivorous mammal of the hyénidés family. It measures between 110 and 136 cm long and 74 to 79 cm at the withers. The weight of the animal ranges from 28 to 47.5 kg. In general, the male is both bigger and larger than the female. This species is found in the south-west Africa, specifically on the coast of Namibia and southern Kalahari.

Legs and backs of the brown hyène are inclined downwardly. Its ears are straight and ragged. The fur of this mammal is variegated with brown, black and white. The hair is usually long and the neck and the shoulder of the brown hyena are covered with a mane. Black and white stripes are visible on the legs. There is no obvious dimorphism in the brown hyena since males and females are almost identical. Like the other members of the family hyénidés, its jaws is powerful.

Brown hyenas live in clans composed by females and their young. Each hunt alone, but all attend to the needs of the yougs. The males are mostly solitary because they are more mobile than females. They incorporate the clans at the approach of the breeding season. It takes place from May to August. After a gestation period of 97 days, each female gives birth to 1 to 5 young. Until the age of 3 months, they are breastfed at dawn and dusk by their mother or other female clan. Their food is then embellished with meat.

Like all hyénidés, the brown hyena is a scavenger. So it eats mainly carcasses. This does not prevent it from eating fruits and eggs. It is also able to chase small animals in its path. To search for food, the mammal is able to travel 20 km in one night.