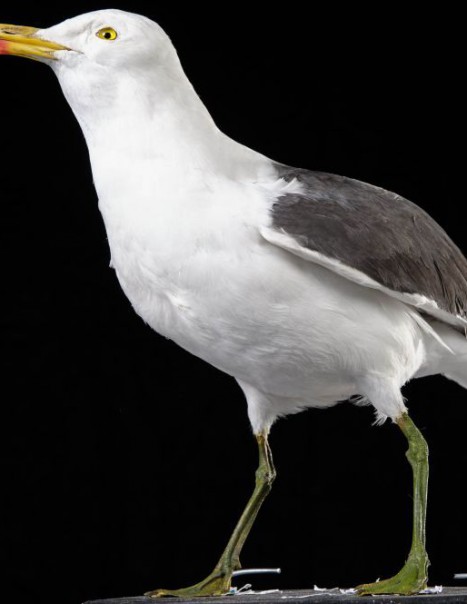 The kelp gull, also known as the Dominican gull, is a gull which breeds on coasts and islands through much of the southern hemisphere. It is a sea bird found around South America, parts of Australia and New Zealand.

The kelp gull superficially resembles two gulls from further north in the Atlantic Ocean the lesser black-backed gull and the great black-backed gull. The kelp is intermediate in size between these two species. It ranges from 54 to 65 cm in total length, from 128 to 142 cm in wingspan and from 540 to 1,390 g in weight. Adult males and females weigh on average 1kg and 900 g respectively.

The adult kelp gull has black upperparts and wings. The head, underparts, tail and the small “mirrors” at the wing tips are white. The beak is yellow with a red spot and the legs are greenish-yellow.

The call is a strident ki-och. Young have dull legs, a black beak, a dark band in the tail and an overall grey-brown plumage densely edged whitish, but they rapidly get a pale base to the beak  and largely white head and underparts. They reach maturity at the age of 3 or 4.

There are five subspecies of kelp gull.

Kelp gulls have been observed feeding on whales. The kelp gull uses its powerful beak to peck down centimetres into the skin and blubber, often leaving the whales with large open sores, some of which have been observed to be half a meter in diameter. This predatory behavior has been continually documented in Argentinian waters, and continues today. At rocky sites along the southern African coast, such as at Boulders Beach in Cape Town, kelp gulls can be seen picking up shellfish and repeatedly flying up several meters and dropping them onto the rocks below in order to break them open.

It is a coastal bird and its nest is a shallow depression in the ground with vegetation and feathers. The female usually lays two or three eggs. Both parents feed the chicks.