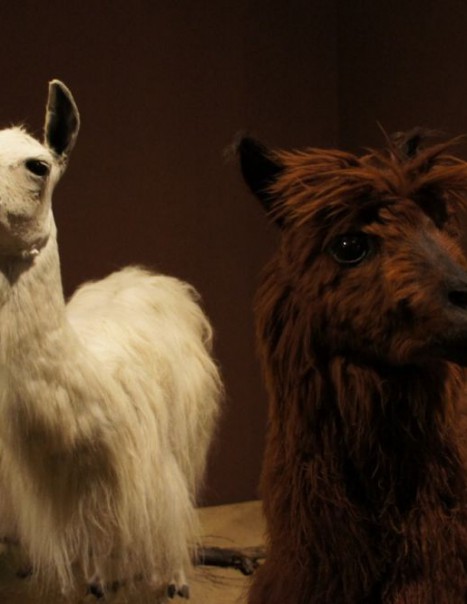 The guanaco is a camelid native to South America that stands between 1 and 1.2 metres at the shoulder and weighs about 90 kg. The colour varies very little ranging from a light brown to dark cinnamon and shading to white underneath. Guanacos have grey faces and small straight ears. The name guanaco comes from the South American language Quechua word wanaku. Young guanacos are called chulengo.

The guanaco is a vulnerable animal native to the arid, mountainous regions of South America. Guanaco are found in the altiplano of Peru, Bolivia, Ecuador, Colombia, Chile and Argentina. Bolivian Indians have been known to raise guanaco to help them regain their population stability.

Guanacos live in herds composed of females, their young and a dominant male. Bachelor males form a separate herd. While female groups tend to remain small, often containing no more than ten adults, bachelor herds may contain as many as 50 males. When they feel threatened, guanaco alert the herd to flee with a high-pitched bleating call. The male will usually run behind the herd to defend them. They can run with a speed of 56 km per hour, often over steep and rocky terrain. They are also excellent swimmers. Mating season occurs between November and February, during which males often fight violently to establish dominance and breeding rights. Eleven-and-a-half months later, a single chulengo is born. Chulengos are able to walk immediately after birth. Male chulengos are chased off from the herd at approximately one year of age.

Guanacos are one of the largest wild mammal species found in South America. They have only one natural predator, the cougar. Guanacos will often spit when threatened.

A guanaco’s typical lifespan is 20 to 25 years.