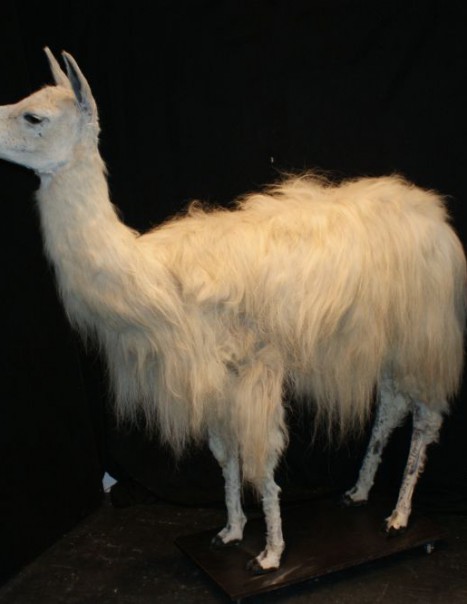 The lama is a mammal of South America. It is the order Artiodactyla of the Camelidae family. The largest population of domesticated llama is mainly in Peru. In the wild, they prefer the high mountains like the Andes.

Its coat is generally sandy beige color with some black spots. It may also happen that it be black or brown. Its closest relative is the camel. His head is smaller but has the same shapes. Its ears, long and small, are very mobile. His eyes are protected with long eyelashes. Its legs are spaced further apart and have fingers like camels. Its tail is bushy and short. It can measure up to 120cm to adulthood and can weigh between 80 and 160 kg.

Llamas communicate with each other through various cries that can express many things like fun after a sexual act, the sadness, the warning for a supposed danger or antipathy toward other males, it lives in a small horde composed of several females and a male. The llama is a herbivore and is very fond of grass and leaves. It can consume up to 3 kg per day. During dry periods, it can live for days without eating or drinking.

Llamas often spit on his fellows, and very little on a human, to defend themselves and express anger. This spit is composed of highly viscous liquids stomach that it regurgitates. This feature distinguishes them from other animals of the camelid family.

Viviparous females have no period on heat and can therefore be fertilized throughout the year. Gestation lasts 11 months and they give birth to a single pup each time. Sexual differentiation occurs within two weeks. Sexual maturity is reached between one and two years for females, but 24 months for males.

In areas of Peru, domestication has led to use for transport and construction. Llamas are also popular in South America for their fur and flesh.