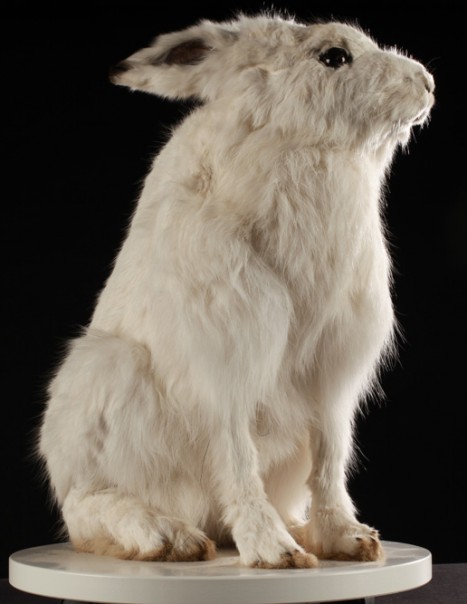 The Arctic hare is a mammal that belongs to the same family as rabbits. It is characterized by its morphology and behavior that allows it to more easily adapt to the cold. Its range extends from Alaska to Greenland via Canada.

This species of hare measuring between 55 to 70 cm and weighs on average of 4 to 5.5 kg. The female is usually heavier than the male. Its little tail and digestive system are similar to other hares. Compared with rabbit, ears are longer but compared to other species of hares, they are shorter.

It is often hunted by the Arctic wolf and sometimes the bear, polar fox or wolverine.

Its color changes depending on the climate and season. In winter, the Arctic hare is white to blend in with the snow and summer its coat becomes gray-brown, always adapted to the environment and better protected from predators. The arctic hare is able to walk on snow depths different with its fingers apart legs.

The hare detects its food through a sense of smell. It feeds on woody plants, including its buds, berries, leaves and various herbaceous. Its diet is primarily herbivorous, but he sometimes eat small animals.

Reproduction side, the female can give birth to up to eight small hares. A male can mate with several females during the mating season.

Arctic hares stay sometimes together to warm up, but it is generally a solitary animal. For protection from the biting cold of winter, it digs its shelter in the snowdrifts where it rests in curling up into a ball to better conserve heat.

At the slightest sign of danger, it stands and ran at full speed, leaping through its developed legs. When they stay together, hares post an individual who will raise the alarm in case of danger and allow the colony to move rapidly away.