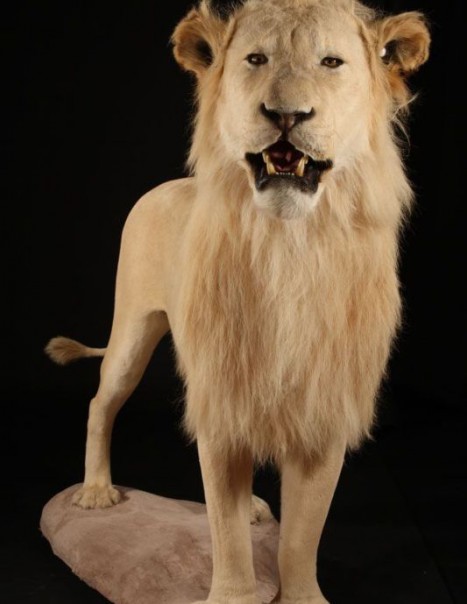 Full mount/stuffed white lion – Panthera leo krugeri
We realize unique and original mountings of stuffed white lion!
As our work is on measure, you can choose the mounting and the pause of the animal : walking, sitting, standing up, …
Stuffed head lion is also possible.

The Panthera leo is one of the five big cats in the genus Panthera and a member of the Felidae family.The white lioness is native from the Timbavati region in South Africa
The lion is the second-largest living cat after the tiger. The lion’s closest relatives are the other species of the genus Panthera : tiger, jaguar and leopard.
Highly distinctive, the male lion is easily recognised by its mane.
Lions live for 10–14 years in the wild, while in captivity they can live longer than 20 years. In the wild, males seldom live longer than 10 years, as injuries sustained from continual fighting with rival males greatly reduce their longevity.
Savanna and grassland are their typically inhabit, although they may take the forest and the bush. Lions are unusually social compared to other cats. A pride of lions consists of related females and offspring and a small number of adult males. While lions do not typically hunt humans, some have been known to do so. Sleeping mainly during the day, lions are primarily nocturnal, although bordering on crepuscular in nature.

White lions are not a separate subspecies and are native from the Timbavati region in South Africa.

They have a rare color mutation  which varies from blond to near-white.