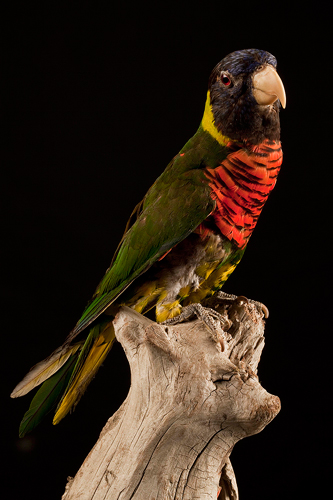 Rainbow lorikeets are true parrots within the Psittacoidea superfamily in the order Psittaciformes.

The rainbow lorikeet is a medium-sized parrot, with the length ranging from 25 to 30 cm including the tail. The weight varies from 75 to 157 g.

The plumage of the nominate race, as with all subspecies, is very bright. The head is deep blue with a greenish-yellow nuchal collar, and the rest of the upper parts (wings, back and tail) are deep green. The chest is red with blue-black barring. The belly is deep green, and the thighs and rump are yellow with deep green barring. In flight a yellow wing-bar contrasts clearly with the red underwing coverts.

There is little to visually distinguish between the sexes; however, to a keen observer of their colouring and behaviour, their dimorphism is readily apparent.

Juveniles have a black beak which gradually brightens to orange in the adults.

The rainbow lorikeet lives in Australia. It is common along the eastern seaboard. Its habitat is rainforet, coastal bush and woodland areas.