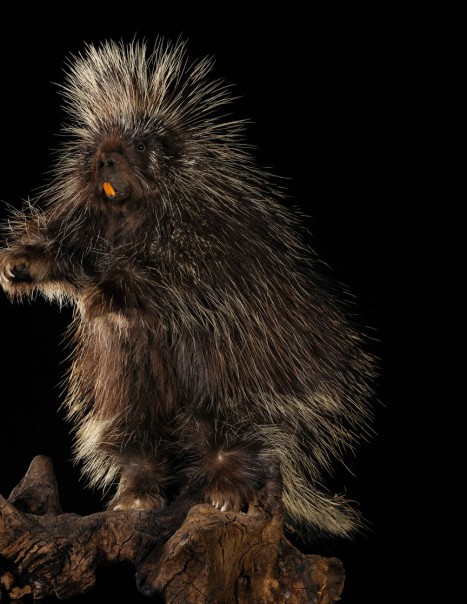 The North American porcupine, also known as the Canadian porcupine or common porcupine, is a large rodent in the New World porcupine family. The beaver is the only larger rodent in North America. They range from Canada, Alaska, and into northern Mexico. They are commonly found in coniferous and mixed forested areas but have adapted to harsh environments such as shrublands, tundra and deserts. They make their dens in hollow trees or in rocky areas.

The coat of porcupine is not only of spikes. Under those many pins are projecting a thick black fur with long polished chestnut hair.
The rest of its body is covered, except for its nose and chest, from 20.000 to 30.000 needles property attached to its body in order to prevent them from being torn off. These spikes can measure 1.2 cm on the head and 12.5 cm on the rest of its body, allowing it to defend itself and even float in water of a lack of being a good swimmer. All the spines or hairs that it would be lost, will grow back.

Some sense of this animal are very developed, such as hearing and smell. However its little eyes do not allow it to have an excellent view.
Four incisors and 12 premolars and molars arming its little mouth allowing it to settle and crush the food it eats. The porcupine is able to climb trees with long claws that decorate its little legs.

The porcupine diet varies with the seasons, as this herbivore eats foods that are in range. It is for this purpose that the porcupine feeds, in summer, on buds and leaves of poplar aspen, willow and white birch. It also appreciates the leaves of many grasses and herbaceous plants, shrubs such as raspberry, plus some small fruits such as nuts, acorns,… During the winter, it bites the inner bark of pines, spruce, larch and small maples that guarantee a continuous supply since it does not hibernate.