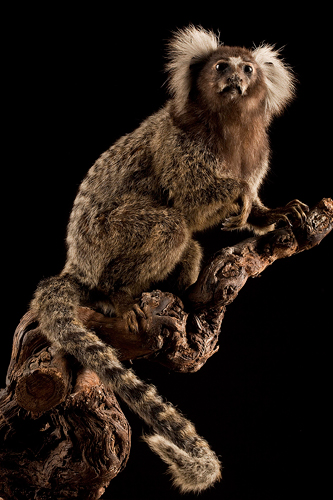 The common marmoset is a primate species of the Callitrichidae family.
There are six species included in the genus Callithrix :

Common marmoset is found throughout the Northeast of Brazil, in the State of Bahia. It is present in the north to the Atlantic coast between the cities of Natal and Parnaíba, west to the Rio Parnaíba and to the Rio São Francisco.

This animal live in the rainforest and savanna, in the mangroves, plantations, gardens and parks. This monkey is very adaptable.

The female is lighter than the male. The dress is black ticked gray-brown, with transverse stripes in the lower back. There are paler specimens in dry regions and brown in wet cooler regions. The tail is ringed and white hair on the forehead and around the eyes draw it a diving mask. Young lack these lights brushes and their fur is uniformly dark, except for the head and neck are gray.

The measurements are pretty much the same for 6 species of Callithrix.

This is a quadruped and it runs, climbs, jumps or skips. It sometimes progresses by leap-hanging, sometimes leaps with exaggerated movements, especially during the game. It can gallop, tense or arched tail. It sits on a branch in a sitting or lying position on stomach, the unwound tail in contact with one or more peers or alone.