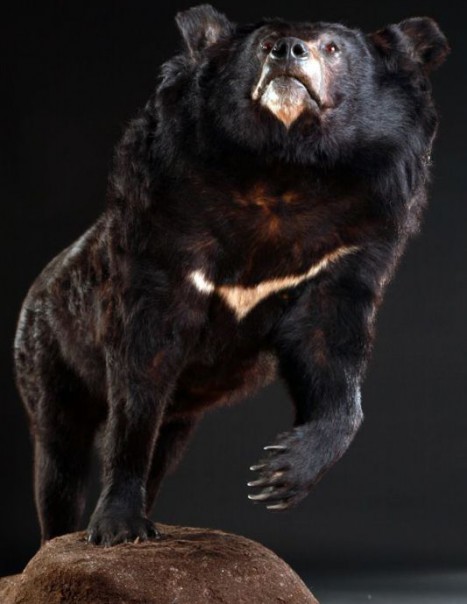 Sometimes called Tibetan bears, black bear or Tibetan black bears because of the crescent-shaped task on its chest, is a bear that lives in the mountains of Asia, mainly located in the Himalayas.

His hair is short and smooth, except on the shoulders and neck as they are long.

It lives in the mountain forests and especially lives out at night. The day it sleeps in caves or trees; it is a very good climber. In the summer, he is seen at 3000m while the winter it goes down to 1500 m.

It is vegetarian; it eats fruits, nuts, acorns but also honeycomb, insects, invertebrates and carrion. In 3 to 4 years, females can give birth to cubs born in October and February, the coupling happens from April to June.

In captivity, the black bear can live up to 20 years.

The American black bear is the species closer to it.

The Asiatic Bear is a sacred animal for some populations in Japan. To date, it is classified as vulnerable.