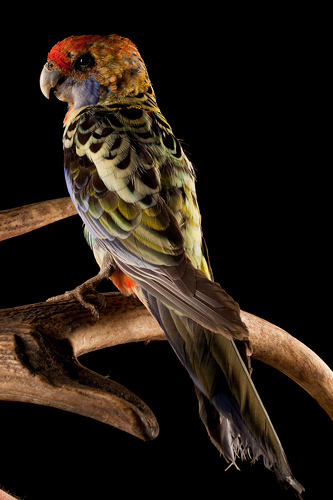 Also called the Parakeets Pennant, the crimson rosella are endemic to eastern and south-eastern Australia and some islands along the coast.

Adult males have a red dominance plumage. The female resembles the male. However, it differs from its partner by a smaller beak and a narrower upper mandible. It has no stripe under the wings. Young show an olive-green plumage dominance. The front cap, areas adjacent to gray-blue cheeks, throat, upper chest, thighs are red. The tail feathers are dark olive green. The underside has a stripe.

Given the vast size of the range, there are many geographical variations, some look very different: some scholars have identified six subspecies that have been divided into three color groups.

Pennant parakeets frequent tropical and humid subtropical forest near the coastline and surrounding mountain forests up to 1900 meters. They are found mainly on the edge of the rainforest, in secondary areas and in dense eucalyptus forests.

Adults are sedentary. They usually live in pairs or small groups. In contrast, young and subadult form noisy and quite many groups that roam locally and leave the common dormitory from sunrise. Their main activity takes place in the morning and late afternoon. In the middle of the day, they rest in shady foliage. However, if the sky is overcast and the weather is cool, these birds are active during the day. Pennant parakeets looking for their food on land, in the trees and in the bushes.

Pennant parakeets are very shy, they can be approached in a very short distance. In urban areas, they are particularly familiar.

Nesting season runs from August to February and sometimes even later. Pennant parakeets nest in a hole branch or in the cavity of a tree trunk. They usually choose a dead or healthy eucalyptus, but sometimes they install their nests in such a strange place as the metal beam of a construction crane. In all cases, the nest is located at a great height above the ground. Laying generally includes 4 to 7 white eggs, which are incubated for about 19 days. The female broods the nestlings but receive equal care on the part of both parents. The nesting cycle is quite long and takes about 5 weeks

Pennant parakeets have a mixed diet with vegetarian dominance. They consume seeds, figs, acacia seeds and eucalyptus. The plant part of their menu is complemented by a large variety of plants and they also ingest the fruits or flowers and trees. Insects are not forgotten in their menu: Hemiptera, psyllids, termites, aphids and beetles larvae. Parakeets sometimes behave like true plagues in orchards, they will consume apples, plums, pears and quinces