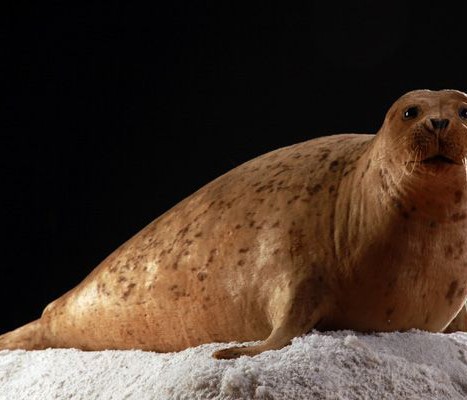 The seal is a carnivorous aquatic mammal that belongs to the family of phocids, the order of pinnipeds This animal is present in nature in several varieties. Currently a total of 18 living species of this family have been identified. The most common seal of all these species is called the sea-calf or Phoca vitulina. It has a life of up to 25 years for males and 35 for females, but with varieties that are a function of the environment in which it lives.

Seals are characterized by their aerodynamic body with fat thickness ensuring their good isolation from the external environment and palms forward and reverse. They can close their nostrils when they dive into the water to get oxygen from their blood.
For the best-known seal, its average male measuring 1.55 m and weighs about 90 kg. Regarding the female it measures an average of 1.45 m with a weight of 70kg.
Seals feed on fish, squid, crustaceans they obtain in the waters of the seas where they live.
Seals are sexually mature between 4 to 7 years for males, females reach maturity at 3 to 6 years. This becomes effective when the weight of the female is more than 50 kg and 75 kg for the male
Mating occurs most often in water. The mating season is divided between the spring and early fall. Gestation lasts up to nine and a half months. The female usually gives birth to a single pup, however, it may happen two. The birth took place on the shore and the small can swim one year after the birth. It is the female who is responsible for its young and breastfeeding is for 4 to 6 weeks.
This species occupies the coastal waters of the northern parts of the hemisphere. It is often found in the Arctic, also in the north of the Atlantic and the Pacific. Sometimes in the mediterranean, the Caribbean and Hawaiian waters. This animal prefers to rest on the plates along the ocean at low tide. These species are under threat of epidemics due to the pollution found in some marine areas of the globe. They may suffer the adverse effects of global warming which is exposed planet. Not to mention the cases of suffocation that recorded at the fishermen’s nets added to the seal hunt is practiced illegally, are factors that could contribute to the disappearance of these species.
Category: Full