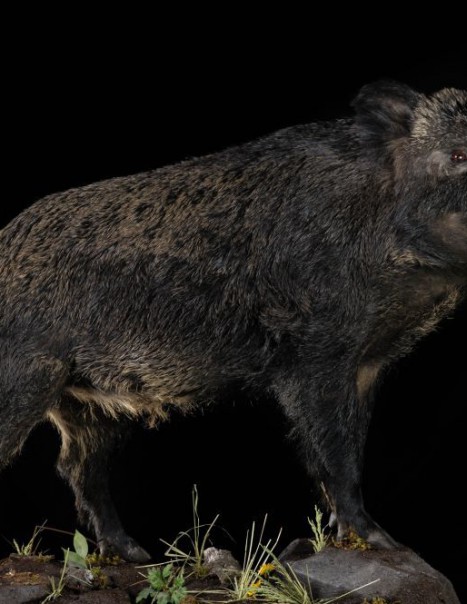 Bushpig Cape is one of two species of bushpig living east and southern Africa. This mammal belongs to the suidae family.

It is found in Ethiopia, Somalia, southern Democratic Republic of Congo, Cape and KwaZulu-Natal in South Africa. It also operates in some Indian Ocean Islands like Madagascar and the Comoros.

It is a medium-sized mammal, robust with a body on short powerful legs. An adult is between 65 and 100 cm at the shoulder and between 65 and 100 cm long with a weight of about 55 to 150 kg. They resemble the domestic pig, but can be identified by their muscular muzzle, their little eyes and tufted ears. It has kind of warts on the face under the eyes similar to those of warthogs, but are less important. The skin color varies from red-brown in western to orange-yellow range in Gabon, reddish brown to blackish brown in Zimbabwe and South Africa. With age, the skin becomes darker. The head and neck are yellow with white hair and a long white mane of up to 16 cm in the back at the base of the tail. Like warthogs, bush pigs run with their tails down. Males are generally larger than females.

Bushpig Cape prefers wooded areas with water points. It fits various environments such as rain forests, the compounds of grass marshes, reedbeds and areas with dense forest cover.
It is omnivorous feeding of meat and vegetables. It has well developed incisors on upper and lower jaws that are used to bite and tear food such as meat. With its nose, it seeks food in the soil for bulbs, roots, insect larvae, caterpillars and grasshoppers. Snakes, lizards and other reptiles, are also part of the diet.

Its reproductive cycle is seasonal. In southern Africa, the majority of births take place at the beginning of the rainy season. It reaches sexual maturity at the age of 20 months. After a gestation period of 110 to 120 days, the female gives birth to 3 or 4 youngs on average, and they can live for over 20 years.

It is mainly nocturnal and does not migrate. During the day they take refuge in the vegetation to rest and hide from predators.

This is not an endangered