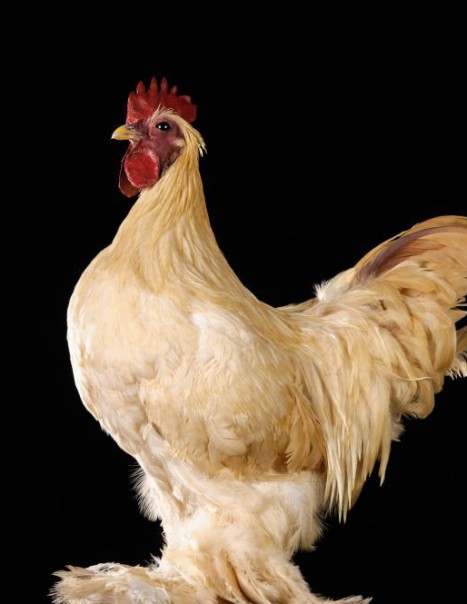 The chicken is an omnivorous bird subspecies of the order Galliformes.

This bird is breeded both for its flesh, its eggs, for the battle and sometimes for its feathers.

There are many breeds mainly from the domestication of a particular wild species, Rooster gold still often mistakenly called Coq bankiva. This is the species of birds whose population is the largest, with about 52 billion on Earth.

The male chicken is the rooster. A young is called a chick and a pre-adult male is called cockerel and became chicken, a female chicken is a chick. A cockerel  castrated, so that its flesh is softer, is a capon. Capons and hens are more corpulent and have more fatty meat than their non-castrated.

This subspecies of tropical origin, adapts to a variety of backgrounds, with the exception of the high latitudes, beyond the Arctic Circle, where the days are too short in winter.
The eyes of the hens do not allow them to see at night, making it a diurnal animal only. The hen is a land and precocial animal.

Corn is a staple food for chickens. This is an animal adapted to the race it has three fingers resting on the ground and flies very little. An adult laying hens eat more in winter than summer to resist the cold, needs also increase during moulting period. When the chickens eat less because of the heat, it is advisable to give them more concentrated food for them to have an adequate intake of nutrients despite the decrease in consumption. Ideally, poultry should have free access to food and water and can consume as much as they wish. In general, they are content to the amount necessary to meet their nutritional needs. Otherwise, two meals a day are recommended.