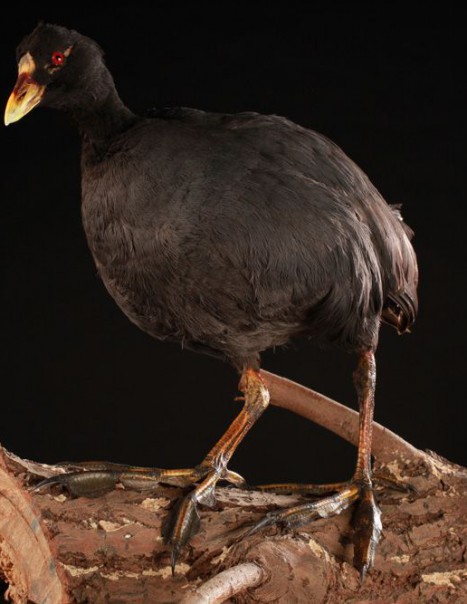 Common Moorhen – Gallinula chloropus
The moorhen has a slate-black plumage. The upper parts are brown. You can see a white stripe on the sides and median coverts are white.

The sharp beak is red with yellow tips and extends to the front with a red faceplate. The eyes are dark red. Paws and long fingers are greenish.
Both sexes are similar, with slightly larger male.

It lives near fresh or brackish wetlands water where vegetation is abundant and emerging with banks offering covered. It is found near ponds, calm rivers, marshes, lakes, and also in the waters of urban parks.

It swims, walks or runs along the banks. This bird is a very good diver, it is also very fearful, often in hiding but it is also found in the grass at the edge of the water.

For feed, it picks the surface of the water in the emergent vegetation. It plunges its head, it wades and can dive for food, including seeds and roots of aquatic plants. It pecks molluscs, seeds under the floating leaves. The species is omnivorous, they uproot aquatic plants, grass, leaves, trees and bushes. They also eat mollusks, insects, earthworms, some fish, tadpoles and eggs of birds.

They are monogamous. They build several nests, and when the young have left the main nest, they used to sleep at night.

The nest is established in emergent vegetation on land, sometimes floating in low bushes or high in the trees. It is a platform full height, with a deep bowl garnished with herbs, often based on the remains of a nest of another bird or a squirrel. The female lays eggs from May to August. Incubation lasts 3 weeks. There may be between 2 or 3 clutches per year, between April and July. The young leave the nest immediately. They are often brooded during the first two weeks, especially in cold or wet weather. Parents and young from first litters care for chicks sometimes for 6 weeks. The young are independent at about 3 or 4 weeks.

This species is common and widespread, and its lifetime is estimated at 15 years