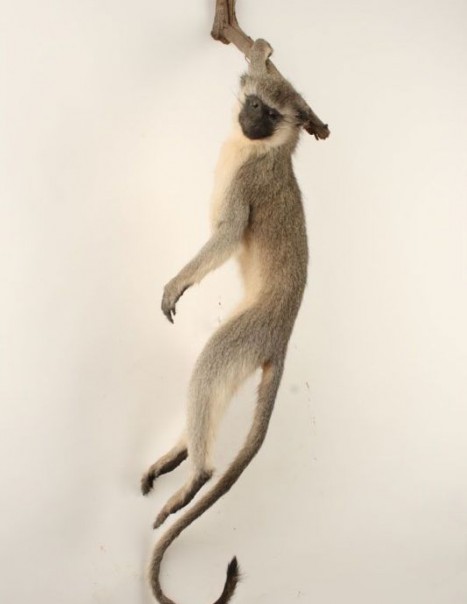 Vervet monkey – Chlorocebus pygerythrus
The Vervet monkey is native to Africa and is part of the Cercopithecidae family. The dénomation Vervet is used to describe all such members.

Physically, the Vervet has a black face with white fringes. Its body is covered with hair tending to gray. Males wear a red penis and a pale blue scrotum. Adult males weigh between 3.9 kg and 8 kg for an average length of 49 cm, while females range between 3.4 kg and 5.3 kg with 42 cm of medium length. Its tail can measure up to 1.20 meters.
This diurnal lives in groups, some of which consist of a seventy individuals. There is a dominance hierarchy among the species that can live up to 30 years. Communication within a group is quite developed in both the sign and oral. The age of reproduction starts from 4 years. The female can make a single small in scope for a gestation period of about 160 days.This inhabitant of coastal forests, mountains and savannas lives mainly in eastern and southern Africa, including Somalia, Ethiopia, South Africa and in the extreme south of the Sudan. They can adapt their lifestyle in areas where vegetation is scattered or even in cultivated areas. At ease both on the ground and in the branches, vervet is also a good swimmer. Some specimens are found in urban and suburban environments. Therefore, they are more exposed to predators such as snakes, eagles, but also dogs and electric pylons.

The Vervet feeds on fruits such as pears and on leaves, seeds and flowers. It does not disdain complete during its menu insects and bird eggs. If it lives in an environment inhabited by man, it eats chicks, bread and maize.

Did you know that the Vervet was already known in the time of ancient Egypt and frescoes dating back 2,000 years BC attest that this animal was familiar to the inhabitants of the island of Santorini at that time?