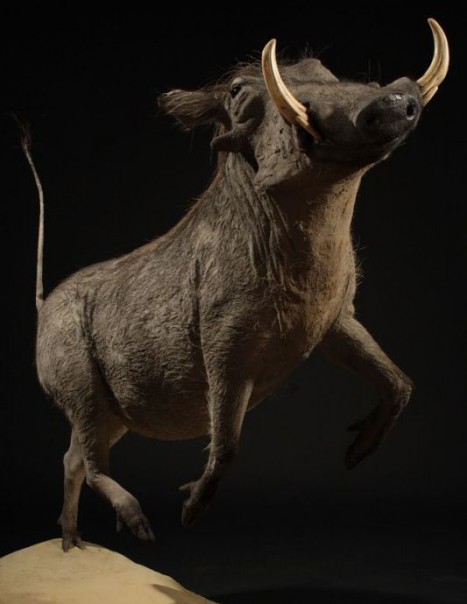 This is a mammal of the order Artiodactyla and Suidae family like wild boars and pigs.

At first glance, it looks like the boar. It is usually dark gray, sole adornment, a thin mane on the back. It stands out among pigs by warts on its face and the two defenses (horns) curved upward. It is also distinguished by its wild nature and size that is smaller than the pig or boar.

Its origin is Africa and its main habitat is located in the savanna of East and Southern Africa.

As it is wild animal, it has a brutal behavior: it can run at a speed of 50 km/h, rolling in the mud and fight. Its defenses are actually used to defend itself and poking the earth to extract the tubers.

The warthog is omnivorous and herbivorous. It eats everything within range (carrion, grass, leaves) and loves tubers and bulbs. Warthogs engaged primarily in search of food.

In the savanna, the male warthog lives alone; the female lives with its young after a gestation period of 175 days and has a range of 4 to 8 at each birth.

This is an animal that is not protected despite the poaching and hunting that men do against it. It is also an animal that repels by its appearance and has never attracted the sympathy of pet lovers. Yet in recent years, becoming a star cartoon, warthog is becoming better known and raise amusements and sympathy.