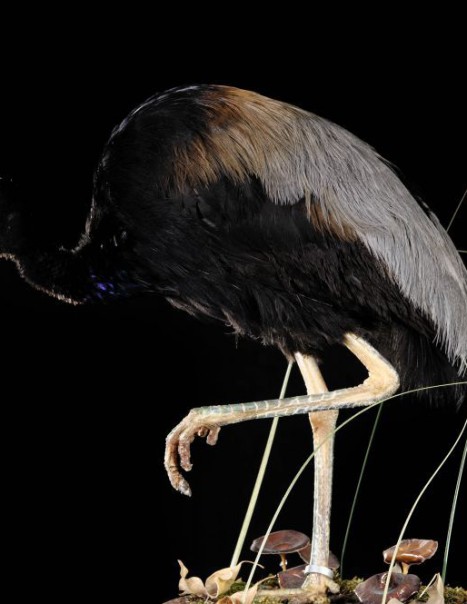 The grey-winged trumpeter has the size of a pheasant.

Its plumage is black except the lower back is ash gray. A diffuse band of reddish-brown color separates the center of the back of its black upper gray bottom. The wings are very curved and always kept away from the body, the tail is covered with fluffy feathers of the back and rump up which gives the bird a rounded and hunched appearance.

The neck is long and black with short feathers with green and purple metallic sheen. Its beak is short and powerful and legs are relatively long and greenish. The grey-winged Trumpeter emits a very nasal sound that resembles the sound produced by the guinea fowl.

This species lives in the rainforests of northern South America, the Amazon and Guyana, it avoids cultivated areas and remains in the forests.
This earthly bird, live in groups of six to twenty individuals and groups often follow arboreal animals to enjoy the fruits and nuts they drop.

The grey-winged trumpeter flies only over short distances and uses the flight to escape a predator.

Before mating, the male and female perform a parade. The breeding season is poorly understood and only a few females in the group lay eggs.

The species is not threatened, but we must be worried.