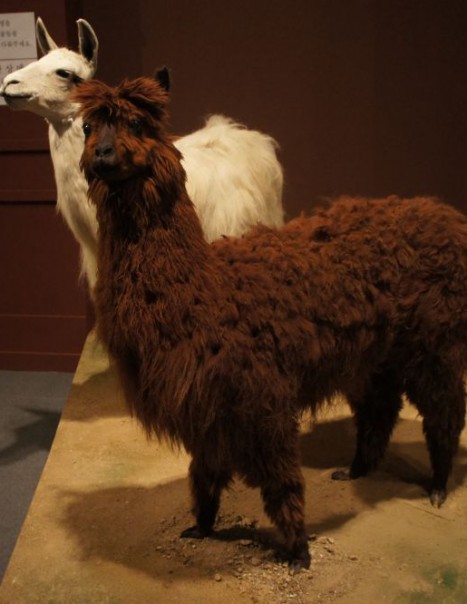 The alpaca is a mammal family member of camelids such as lama, guanaco and vicuna. Long considered a descendant of the guanaco as the Lama, he ruminates but is not classified in the family of ruminants. According to their coat, there are two types of alpacas: Suris and Huacayas. Its average life is estimated at 20 years.

Small camelids are very social animals. They can live alone, a minimum of three animals flock whatsoever is necessary for the support of the alpaca. The herds consist of a dominant male and females with their youngs. All other males in a separate herd. Power relations are settled mostly by sputum thrown alpaca. Sputum can be used as a defense and assertiveness. It is composed of saliva and grass or other food having been consumed by the animal when it comes to several males coveting the same female, the relationship between them can be very brutal, biting, head shots and go even unto death for one of them. So ideally, visually separate male and female, not having power between males.

Alpacas are herbivores ruminants. They feed primarily on grasses, potatoes, carrots, beans, straw … They can eat any type of grass, even one with a very low quality. Indeed, their digestive system is much more efficient than other ruminant mammal. In addition, they have three stomachs and not four like other ruminants. The average consumption of food is 1.5 to 2 kg per day and can reach 3 kg for alpaca gestation.

The alpaca has no fixed breeding period, it is the covering that triggers ovulation. However the majority of births take place in the hot season and the hot hours of the day for the babies to dry. The mother could not lick. The covering lasts half an hour. Next, the female carries 11 months before the birth. During the first 7-8 months, little grows but does not put on weight, making it difficult to see if a female is full, then it starts to grow to term. The female gives birth to a single pup per year. A baby alpaca weighs 7kg on average and already has a fleece of a few centimeters. The female can be bred again ten days after it gave birth. It nurses her young about 6 months. An adult female is 6 months but it has not finished growing. A male adult is itself between 2 and a half years and 3 years.

Its natural environment is the Andes in South America, alpaca lives about 4500 meters above sea level. Today, the alpaca is exported all over the planet. Farms were developed especially in England, Switzerland, Australia and Canada.

This is a pet, pleasure and ornament. It is very quiet and soft with a natural affinity for children, it keeps some independence without being shy. This is a very curious and intelligent animal, he has no aggression  to man or other animals. It may coexist easily and is not runaway. However, during the mating season, males become more fierce and spit on other males. Alone in a field, it can become dominant and show aggressiveness jostling with his chest, he will try to block your legs to make you fall.

Alpaca wool is a very high fiber quality, softer, warmer, stronger and lighter than sheep wool. It can mow every year, but its fleece can be kept 2 or 3 years. Indeed, it is recognized internationally as one of the finest fibers and luxurious in the world.