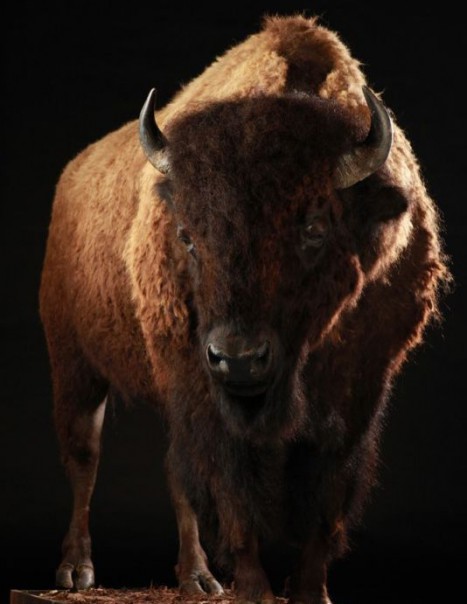 The American bison is one of two species of bison still alive, the other being the European bison. It is characteristic of the great prairies of North America. The bison was a key animal in many Native American cultures.

We find traces of this animal from birth history, and it is already represented in the caves in the form of cave paintings all over the world. His ancestor lived only in Europe, according to estimates, it would have happened in North America there was a million years. These cattle have crossed the Bering Strait to join the great American plains in the nineteenth century, they passed close to extinction. In 1894, at the time of publication of the law banning the hunting of bison, there were about 400 animals. Today the population of the “bison bison” (species of North American Plains) continues to grow with over 350 000 head.

The American bison or American Buffalo is a mammal which belongs to the Bovidae family is therefore herbivore. It consumes various herbaceous as Midwestern prairie grasses or plant seedlings. It is not dangerous to humans except in extreme cases where it can be dangerous running to nearly 60 km / h. An impressive speed for an animal like a yak. It may indeed be up to 3.8 meters for males and 2.2 meters for females and having an average size of 40 cm more with horns. Height at withers up to 2 meters for males and 1.6 for females meters for an equivalent adult weight between 800 and 1100 kg for the males and between 500 and 600 for the other sex.

Bison reach sexual maturity at two and a half years where they can start breeding at mating season in July and August. After nine months of gestation, at farrowing in April-May, we can witness the birth of offspring that usually has one youth. If the range is two, the lower will be abandoned by the mother and therefore doomed. In captivity, bison can live up to 20 years.