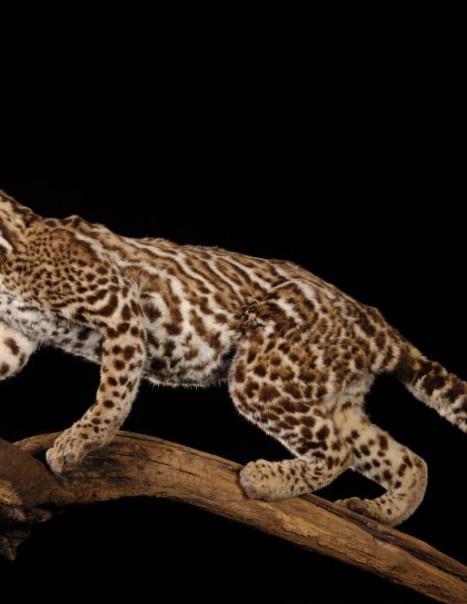 The ocelot is a kind of endemic wild cat of America. It is found especially in Central America and South America.

It is a small feline. Certainly it has some resemblance to domestic cats, but its fur especially reminiscent of a leopard. Moreover, hundreds of thousands of ocelots were killed for their fur, considered valuable. Today, this feline is an endangered species.

It is quite shy and can escape quickly if one comes close abruptly. The size of the ocelot varies between 68 to 100 cm and its measurement tail between 26 and 46 cm. It weighs between 8 and 18 kg. It is particularly distinguished from other felines with its rounded ears and especially by its cream-colored coat to reddish brown, or gray with black rosettes. Over its ears, a white patch can be seen and two black bands are visible on either side of its face.

The ocelot is a nocturnal and very territorial animal. It is ready to fight violently in territorial disputes when necessary. It marks its territory particularly with its urine and smeared excrement to stand out. It is rather lonely like most cats and spends its time in trees or foliage. It abandons its solitary status only to mate during the breeding season. The ocelot is a species that hunts usually much smaller animal than itself.

Mammals such as lizards, turtles, frogs, fish or birds are part of its diet. It owes its performance to hunting, its sense of smell and excellent vision.

If ocelots can mate several times a year, reproduction only takes place every two years. Gestation lasts between 72 to 82 days and the female usually gives birth to a single kitten. It is very rare that range has 2 or 3.