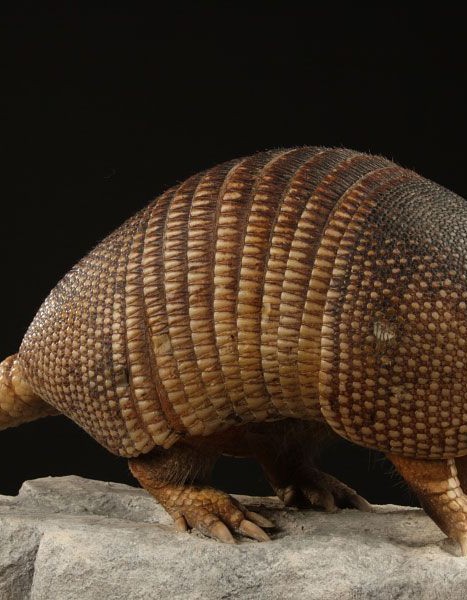 The Armadillo is a mammal native to tropical and subtropical America. Belonging to the family of xenarthra order, armadillo is now in the order of Cingulata.

There are different kinds of armadillo based on the scaly bands which they are covered. Scientists have counted eight kinds of armadillo and more than twenty species. Include, for example, three-banded armadillo whose scientific name is Tolypeutes tricinctus, armadillo six bands scientifically called Six-banded armadillo, armadillo seven-band or Seven-banded armadillo and nine bands, the Nine-banded armadillo.It is a very close animal to anteater or lazy because they are all characterized by the presence of lumbar vertebrae found in other animals. It is recognizable by its bony plates and corneas that form a protective shell against possible threats. The shell of the armadillo covers its back, forehead to tail and even the outer surface of the member is concerned. Moreover, this animal has a snout and short and sturdy legs. The legs have very powerful claws. Finally, its long tongue-shaped noodles can not go unnoticed.

Armadillos are usually insectivores. They feed mainly on caterpillars, grubs, ants,… Armadillo can swallow more than 40.000 ants in one meal. They can also eat fallen fruit or berries. Armadillo usually lives in burrows, build very large. The depth of an armadillo burrows can be up to 3.5 meters deep to 7.5 meters long. It takes care to diversify routes to the terrier whose interior is lined with leaves.

In terms of reproduction, the armadillo is unique. Indeed, it is one of the few vertebrates whose female produces one egg can generate four embryos whose genes are identical. In addition, the egg fertilized after mating between a male and a female can stay up to seven months in the uterus of the female before clinging to the uterine wall to start its growth. This is a delayed implementation of the egg that occurs when young’s life is endangered whether for reasons of climate or food.

The armadillo is unfortunately an endangered species. Indeed, men hunt to be able to make delicious dishes. Also, the shell of the armadillo is used to provide shelter but also tombs.