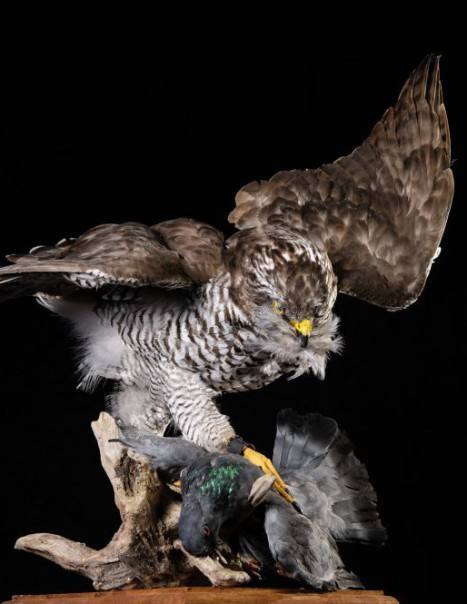 The Northern Goshawk is a diurnal raptor living in woodlands. It is greater than the sparrowhawk. It has a long tail quite broad. The Male is gray above and pale gray streaked below, its cap is blackish and its eyebrows are white. The female is much larger than the male with one and a half times its weight. Its plumage is much duller. Gray-brown above with lighter underneath.

It lives in a variety of settings, plains, highlands, where it stays in altitude up to 1600 meters. It is abundant in hardwood and in all the forests from the Vosges Mountains to the Pyrenees. If prey is abundant, it lives as well in clumps of spruce coniferous, pines, larch, in oak and beech trees in cultivated areas and near urban areas and urban habitats in Europe, America North, Morocco, Asia Minor, the Middle East, Siberia and Japan.
It is very quiet outside the breeding season. The couple reigns over a vast hunting ground.During courtship in early spring, sometimes male and female fly together over their territory and produce a sort of aerial ballet. Its wings are raised and maintained horizontaly. Once the couple is formed, the male begins building the nest, usually placed in a large tree at a height between 10 and 30 meters. However, if an old nest is nearby, the female replaced in the state and uses it. This nest has a circular shape made of branches, twigs, lined with conifer needles or leaves.
This is in April and May that oviposition takes place of 3 or 4 eggs incubated solely by the female for a period of 35 to 38 days. The young fledge 36 to 40 days after hatching. They are fit to hunt only about a month after fledging.

Their favorite prey are birds of all kinds; pigeons, doves, the Starlings, thrushes, blackbirds, crows, jays, partridges, and small birds. But also hare and wild rabbits. It is able to hunt large prey because of its impressive power, speed and agility in flight.

Using its powerful claws, the northern goshawk grabbed its prey and kills it. It consumes it on the spot or take them to tear it up.

The population in Corsica is in a worrying state. The main causes of threat are its low population and the  deforestation.