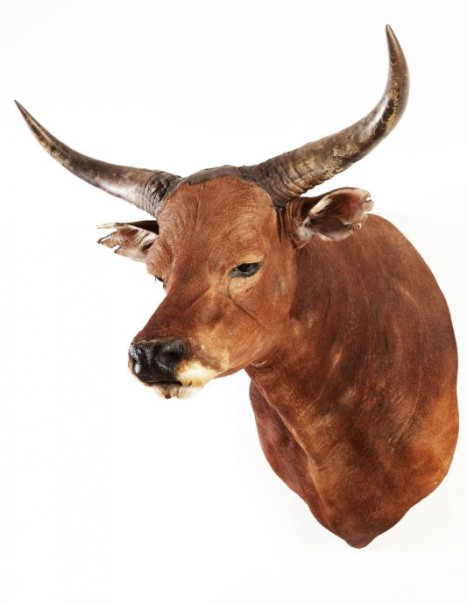 As beef of Bali, it was domesticated by man and has been introduced in Australia, where it forms a large population. They are sexually dimorphic.

The males dress is black to dark reddish brown, while these of females is blonde. Males and females have a white belly, with spots on the hindquarters and legs. Females reach adult size in 3-4 years against 5-6 for males. Animals weighing 400 to 900 kg, a length of about two meters and a shoulder height of 150 cm. The horns of bulls are hard and curved upwards; they can reach 75 cm long and are separated on the top of the head by a kind of helmet that is clearly distinguishable from the coat; those of the cows are much shorter.

They are native to South East Asian continental, Java and Borneo islands. The habitat of wild banteng consists mainly of tropical forests. They also graze from time to time in open grasslands. They live in groups of 2 to 40 cows with calves and a bull. Male herds and solitary bulls, too old or too weak to lead a flock, are also found.

After a gestation period of 285 days, the cows give birth once a year to a young, breastfeed for nine months. It reaches sexual maturity after two to four years.

The life expectancy of banteng is 14 to 17 years up to 26 years in captivity.