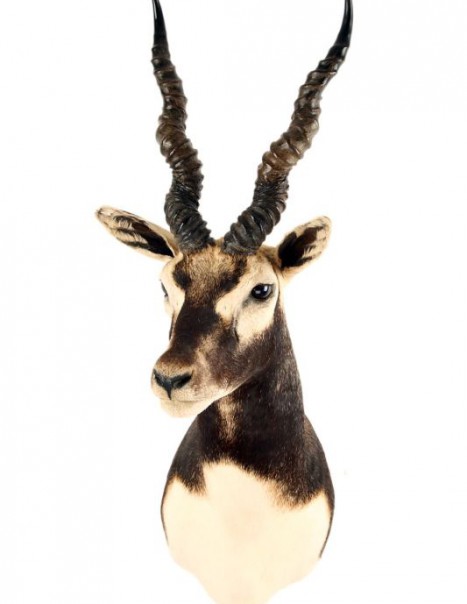 This mammal is an ungulate species of antelope. The blackbuck is the only living species of the genus Antelope.

In this species, males are distinguished from females by their dark coat and twisted horns up to 60 cm high.

They live in savannah, grassy plains, sparse woods. They live in India, Nepal, Pakistan and are, to this day, introduced in the US.

They mark their territory with feces and secretions drip gland near the eye, to push the male youth groups living in the periphery. They also fight, during the breeding season, to retain the right to mate with females harem. The gestation lasts 6 months with 1 small per litter.

The antelope cervicapre is one of the most agile terrestrial animals and the fastest in the world. Very fearful it flees at the slightest danger. Its race can then reach speeds of 80 to 110 km/h, interspersed with prodigious leaps of 6 meters long and 2 meters high.

In India and Pakistan, these herbivores eat grass, leaves and flowers. Their population is still quite abundant. However, human activities threaten more their existence. They are classified as near threatened since 2003, as its range has decreased sharply during the 20th century.

Life expectancy is 10 to 15 years in the wild and up to 18 years in captivity.