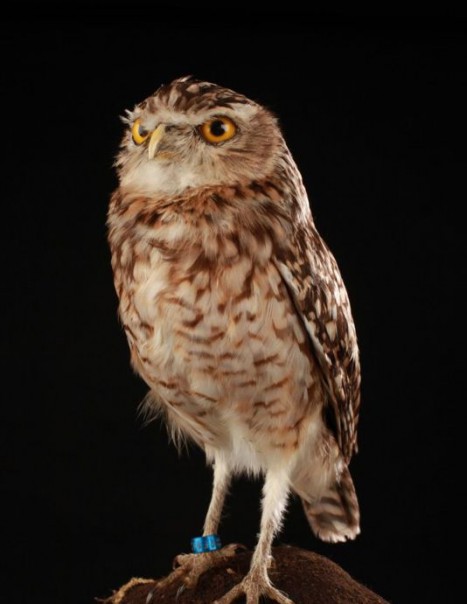 This owl measures 20 to 25 cm, it has a very round head where two white facial disks around two very large black eyes ringed with yellow. The beak is gray, sometimes slightly yellowish. The female is a little bigger and streaked on the belly and the male has a lighter brown color, hard to distinguish from his partner. Young people are less marked and spotted with white on the back, the belly is white and has no horizontal brown stripes.

This species has such a vast territory that there may be differences in size and color depending on the subspecies. It prefers open habitats, savanna, desert areas near pastures, gardens, very close to dwellings. It can be found from sea level up to 4500 m above sea level, on the American continent and Canada to Patagonia, South American, but also in the Caribbean and Cuba.

The species is generally resident, there are only a few migrant species.

Nesting in its burrow, it is often observed on the ground, or average height pitched, often near its burrow. It is monogamous but can become polygamous. The couple nests in burrows that can dig or use burrows of other animals: prairie dogs, marmots, rats, armadillos. The breeding season is from March to August. The male will court the female with friction of the head in a ritual that is part of the Bridal parade. 6 to 12 eggs will be incubated by the female for about thirty days, the male will chase for her throughout the incubation. The young leave the burrow after 15 days and begin to fly after 44 days, the couple feed the youngs who remain close to the burrow. Parents use feces, often taken around cattle, at the entrance of the burrow to attract insects and feed their offspring.

Its lifespan is estimated at 8 years.