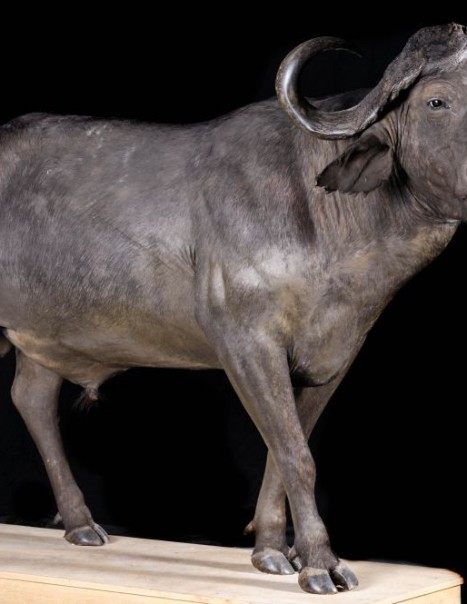 African buffalo – Syncerus caffer
The African Buffalo also called Caffer is a robust and very nervous animal. Hunters believe that this species meat is very tasty. Among the different animals, the caffer is one of the strongest and most durable.

The characteristics of buffalo caffer are impressive. It weighs between 650 and 800 kg for a size of about 1.60 m. The body of the animal is covered with stiff bristles. Some subjects have an almost black dress while others differ in the color gray or dark fawn supported their dress. The large ears are fringed caffer buffalo hair and fixed on a massive head. The Buffalo caffer has greater cornage than the females that carry less wide, flatter and smaller horns. Like most animals, it easily identifies odors with a highly developed sense of smell. The caffer buffalo or wild buffalo has a life span of about 20 years.

Buffalo caffer live generally in the large grassy savanna but some species feel better bushland, wooded savannas and even in forest. Today, we find the most caffer buffalo in southern Africa and East Africa specifically in korongos and in dry forests where they seek shade, tranquility and calme. The caffer is a leading herbivore because it feeds mainly from grasses and herbs. Despite these foods, buffalo can be turned into amateur of buds or leaf picker. When food is in abundance, particularly in the rainy season, the buffalo caffer spends more than 40% of its time feeding. Therefore, it is able to raise more than 20 kg of food which is really huge. He drinks more than 30 liters of water per day.
Buffaloes reach sexual maturity at the age of 2. But they are able to procreate around 4 or 5 years since the length of gestation can be of about 340 days.