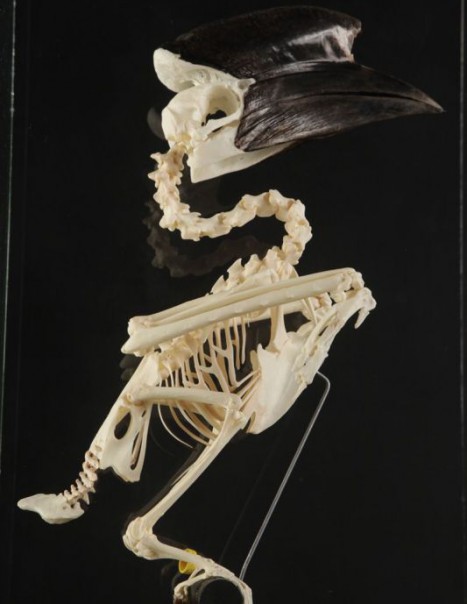 The wreathed hornbill, also called the bar-pouched wreathed hornbill, is a species of hornbill found in forests from far north-eastern India and Bhutan, east and south through mainland Southeast Asia and the Greater Sundas, except Sulawesi.

In the adult male, the cap and nape are red. The front and the back of the neck are white to cream color. The plumage of the body is black, contrasting with the long white tail feathers of the tail. The beak is topped by a helmet that is marked by a series of 9 à 11 notches near the base. Legs and feet are dark olive-gray.

The female resembles the male, but it is smaller. Its head and neck are entirely black. The orbital skin has a color flesh. The bare skin of the throat is light blue with a blue-black line interrupted in the middle. The irises are dark brown with a small yellow spot. Juveniles are similar to adults in relation to both sexes, but at home the headset is absent, it can be confused with the Plain-pouched hornbill.

They frequent the vast expanses of primary forests and mangrove forests. The wings of the two hornbills seem to overlap, particularly in eastern India, Bhutan, Myanmar and possibly also in the Malay Peninsula, Sumatra, Java, Bali and Borneo. Its nomadism and constant movements in search of food makes it difficult to calculate or estimate its density.

When foraging, they borrow circuits that rarely change.

The breeding season runs from February to March. The female lays one or two white eggs which incubation lasts about 40 days. The nests that couples are loyal for many years, are placed in trees at heights varying from 6 to 42 meters. It is fed by the male several times daily, using fruits. After hatching from the egg, the female begging for food and refuses fruit but it will accept again at the end of the nesting season. At four and a half months, the mother leaves the nest with its small, the plumage of the young is identical to that of an adult male.