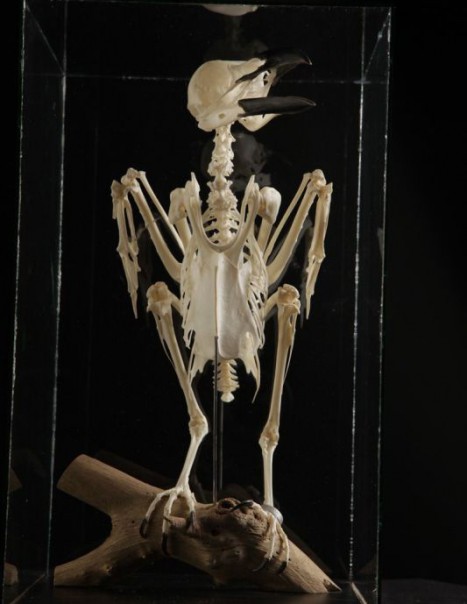 The raven is a bird of the Corvidae family.

Now the species is protected and North American and European populations have increased in their habitat, often beyond the forecast. Human developments provide them with food, water and nesting sites. This species, however, is denoted as endangered in Kentucky and Tennessee states.

Raven has a bright plumage with iridescent blue-violet feathers. The male has long ruffled feathers on the throat. They form a rounded, like a semi-circular array. They are used for communication between group members, especially during parade dominant birds. The wings are long and pointed. The tail is square and often slightly extended. It is a large raven. It has a long beak, strong and black, slightly curved. Its beak is stronger than the crows and covered with black hairs at the base of the upper mandible.The eyes are dark, almost black. Fingers and short legs are black.

Both sexes are similar in plumage, but male is slightly larger than the female. Young is similar to adult, but it did not have shiny feathers. Several breeds are recognized. They differ mainly in size and in color reflections on the plumage.

It is noisy. It can produce 15 to 30 kinds of vocalizations. The usual cries are cries of alarm, the prosecution and defense.

Raven lives in various wildlife habitats, from coastal cliffs to high mountains. It is also found in wooded areas and open forests, even down field.

They nest in areas with cliffs, but they are also found in the tundra and boreal forest, and even in urban areas. It lives in the Northern Hemisphere, in North America, except the southeastern part of Asia, North Africa and Europe. This is one of the most common species in the world.

Raven vigorously defending its young, chasing predators shouting, it communicates by vocalizations, but also by parades. The couple defending its territory and its nest intruders continues and may incur dogfights. It does not migrate, but we can observe seasonal movements to avoid extreme temperatures. This highly intelligent species can survive in the Arctic, as well as in the desert or temperate regions. Couples stay together throughout the year, and probably for life. They are monogamous. The female invites the male to mate, crouching slightly, and moving its wings open, and shaking its tail. The crow has an agile and powerful flight. It hovers like a bird of prey in the thermal currents at high altitude. It conducts aerial acrobatic parade and air battles, making loops and movements developed in flight. It can fly upside down over one kilometer.

Raven nests on cliffs or in large trees, between 3 and 20 meters high. The nest is a large basket made of twigs, reeds and dried plant materials. The inner cup made of twigs is lined with soft materials, sheep wool, lichens, fur, grass, mud and paper. The same nest is often reused, with new material added every spring.

The female lays 3 to 7 eggs light blue-green or olive-green, speckled with dark olive-brown. Incubation lasts about 18 to 21 days, by female. This is fed by the male during this period. The chicks are altricial, covered with scattered down. They are fed by the parents with regurgitated food and water stored in a pouch in the throat.

Raven feeds mainly on carrion. It is fond of the placenta of sheep and large mammals in general. It feeds on the ground and stores all kinds of food. But it also takes arthropods, amphibians, small mammals, birds and reptiles. It also consumes plant food, seeds, acorns, fruits and buds. Raven has some predators such as birds of prey, eagles, ravens other, owls and also the martens.

Raven was persecuted by humans because it was killing lambs and ate in crops. It can be killed, poisoned or captured in traps to protect other species.