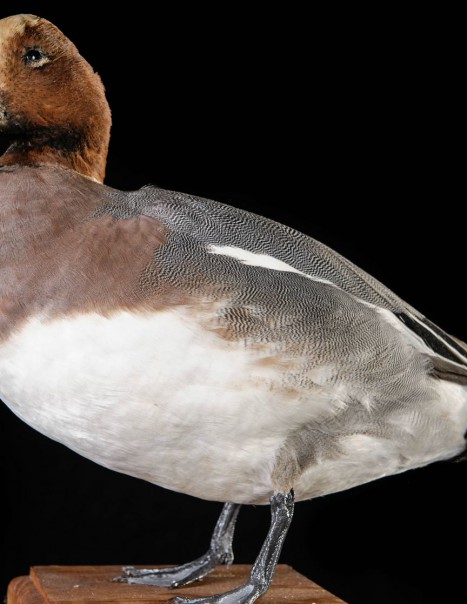 The Eurasian wigeon is a fairly common bird in the Anatidae family.
It nests in northern Eurasia, migrating south in late summer.
Wigeon has a length of 40 to 46 cm and a wingspan of about 80 cm.
Its name comes from its cry, a melodious whistle you hear at night and at dawn. It moves easily to the ground where it takes a large part of their diet, consisting mainly of plants and insects. These ducks returning from their migration per couple.
Sexual maturity can be reached at the age of one year but it seems that many birds breed more tardily. It can live up to 18 years.
During breeding, the species is sexually dimorphic; the rest of the year, the male and female are similar in appearance. The male has a round head, red with a pale yellow stripe from the base of the beak to above the head. It also has a pink bib, a white belly, a black and white rump. The beak is gray blue with black tab. The plumage of the female is reddish brown. The beak is gray dark blue. The adult male performs a complete moult from June to September and a partial molt from August to January, the female moults from July to September and October to May, the young moults partially from October to February.

They nest on the shores, in dense vegetation. The nest is built on the ground by females. It is made of dry grass, the bottom is lined with down. She lays 7 to 10  yellowish-white oval eggs. She incubates them alone for 25 days. Young will follow in the water shortly after birth.

It breeds in the forest tundra, taiga rivers with meandering lakes and marshes and steppes. In migration and wintering, it attends estuaries, mudflats, salt marshes, bays, lagoons, low coastline and sheltered, lakes, reservoirs and rivers.

It breeds in the far north of Europe to Siberia and migrates to winter in southern England, on the French coast, Spanish, Italy, the Balkans and North Africa.