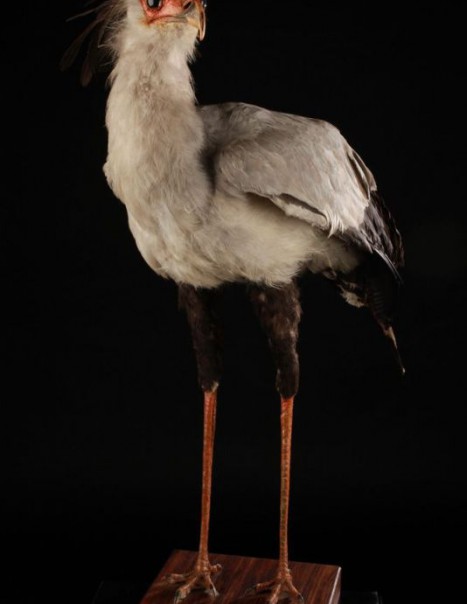 The secretarybird is also called Secretary Bird. It also bears the ambiguous name Ophiuchus, the only representative of the family Sagittariidae.

This diurnal raptor measures between 125 to 150 cm. Its beak is hooked with long black legs of a wader resembling those of Stork. Its neck is adorned with long black feathers forming a loose crest behind the head. Its tail has long middle feathers. To fly, it is forced to start a race, once altitude, it easily glides.

Because of its raptor body and its long legs of a wader, it can be confused with certain cranes or bustards.

Excellent walker, it can travel almost 25 km a day. Present from sea level and up to 3000 meters above, it lives in arid areas of sub-Saharan Africa, Southern Africa, Africa and the Ethiopian area. It plays in wooded areas in the savanna and in the steppe. Pastures and semi-deserts are its favorite habitats.

It hunts exclusively on the ground. It feeds on small vertebrates, grasshoppers, snakes and rodents. It strikes its prey with a one shot legs and when it attacks snakes, it uses its wings as a shield.

It is monogamous and can reproduce all year. During courtship, the couple performs acrobatic flight displays and corrugated manner. The incubation lasts 42 to 46 days.