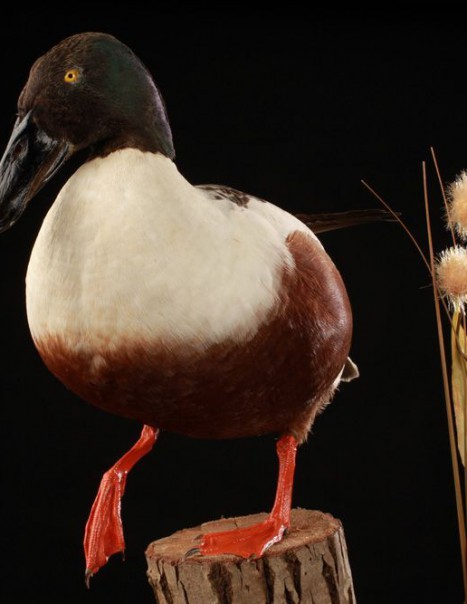 Sometimes simply called shoveler, it is a common and widespread duck

The male is instantly recognizable thanks to its large gray beak, very broad at the end, its bottle-green head and yellow iris. Its chest is white, its flanks and its belly are brown, its back is black. Shoveler is slightly smaller than the Mallard to whom it looks a bit by the arrangement of its colors. It is very quiet

It frequents ponds, marshes, backwaters of rivers and streams.  It likes the fresh and brackish waters. In winter, it searches the sweetness of marine coasts.

They migrate early, at the first frost. They leave Scandinavia and Europe to join in temperate and warm areas. Some even cross the Mediterranean and the Sahara to establish their winter quarters in the southern hemisphere.

The male defends its territory even several days after laying. Its beak shaped spatula is particularly suitable for screening and taking food. Its diet is mixed: plants, aquatic animals, crustaceans, molluscs and plankton capture it in shallow water or filtering the near-surface layer.

The nest is placed on the ground near the water, is lined with down cane. In April or May, the female lays 8 to 12 eggs with incubation that lasts 22 or 23 days. The young are precocial. Raised by the mother, the young fledge at about 6 weeks. Its lifetime is estimated at 21 years